The fleeting nature of life in times past is all too apparent from the briefest and yet most poignant entry in the death column of the Carlisle Journal of 22 February 1845.

This is for a boy who didn't live long enough to make a mark in life but in trying to find out something about him and his parents I found myself following some fascinating links to a Glasgow landmark, a couple of eminent Scots builders and, curiously, a King of Saxony.

This is the entry -

“At Glasgow, on Friday last, Charles, the only son of Mr. McDonald of the Buck's Head Hotel”.

No age is given, but it is very likely this was the “son and heir” proudly announced when he was born the year before (18 June 1844) to a Mrs McDonald at the same hotel.

My first step was to find out about Charles McDonald and the hotel. This advertisement appears in the Carlisle Journal of 8 August 1843.

BUCK'S HEAD HOTEL
61 ARGYLE STREET, GLASGOW
Charles M'Donald respectfully returns thanks to his Friends for the Patronage bestowed on him since he Opened the above Extensive and Commodius HOTEL, and at the same time begs to state that nothing shall be wanting on his part to merit a continuance of Public Esteem.
THE BUCK'S HEAD is situated in the most Central Street in the City, and is in the Vicinity of the various Railway Stations, and Steam Boat Wharfs, for which Conveyances leave the Hotel at the various hours suiting the departure of the Trains and Steamers.
N.B. The House kept open waiting the arrival of the London Mail by Carlisle, and the last Railway Train from Edinburgh, at which terminus a Conveyance will be in attendance.
*** STABLES and LOCK-UP COACH HOUSES are attached to the Premises. 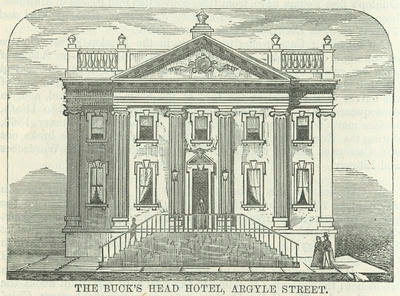 The Hotel was a prime establishment in Glasgow that had existed since the mid 1700s and had long been associated with important events in the history of the city - which can be read about here.

It certainly catered for VIP guests. During July 1844 there were various newspaper reports of it hosting the King of Saxony and of big crowds around the Hotel and of Mr McDonald being seen attending to him in great style.

However, Charles McDonald's early optimism and confidence was short-lived as he, too, was dead within eighteen months, as per another death notice for him in the Carlisle Journal on 22 November 1845 in which it was noted he was “formerly of this city” [Carlislel].

No cause of death is given and one has to ask did both he and his baby son die from one of the raging infectious diseases that often afflicted cities like Glasgow during this decade, or were the two deaths unrelated? What happened to his wife? In that connection, I also discovered an intriguing marriage announcement in another newspaper of 18 March 1845 - “At York Place, Stirling, Charles McDonald, merchant of Glasgow, to Christina Bowie, daughter of late Alexander Bowie, Esq. of Stirling”.  Is this the same Charles McDonald?

Only further research well beyond the scope of this posting might answer such questions. An online family tree (see here) about the Bowie family suggests she had died in childbirth but there are conflicting dates on that family tree as to her marriage and death so one can't be sure. Still, the McDonalds were an example of a mid-Victorian tragedy that wasn't that rare – father, possibly mother, and only child all dead within the space of a year.

After McDonald, numerous proprietors came and went. In 1860, a Mrs. Moffat advertised that the hotel had undergone “a complete renovation in every department”, but less than five years later - twenty after Charles McDonald's brief sojourn - the hotel was razed and replaced with a new building designed by the famous architect, Alexander “Greek” Thomson. 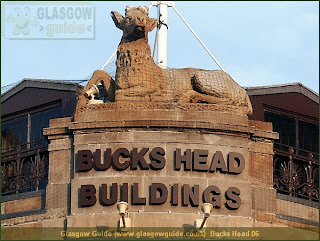