Brother Charles, lost in the shadow - The Zambezi Expedition (10)

In many biographies, books or articles about David Livingstone and the Zambezi Expedition, considerable blame for the mistakes and personality clashes is placed at the feet of David’s younger brother, Charles. He is seen as the main catalyst in the dismissals and resignations, the miscommunication and even some of the unfortunate deaths that resulted. Yet Charles Livingstone is perhaps the most intriguing and complex character in all of this sorry saga.

Was he really the fanatical, uptight, obsessive and, on occasion, frighteningly violent, individual that the records show? Was he just so blinkered and determined to stick to his religious and "moral" duty that he could not tolerate the slightest refraction or weakness in others? Or could it simply be that he suffered from a serious depressive illness or psychological disorder?

Dr Oliver Ransford in his book David Livingstone, the Dark Interior, certainly suggests the latter and quotes several extracts from letters Charles wrote to his wife about his failure to cope, his nervousness and anxiety problems that led him to borderline breakdown, even a fear that "preaching will lead to my end in the madhouse". Ransford also notes that Charles was treated for mental difficulties several times and considers the likelihood this was partly genetic, given David's own stormy and erratic behaviour when dealing with people, and also that other siblings of the Livingstone family had been described as "dottie" or "daft".

Charles was eight years younger than David, born in 1821. He also worked long and arduous hours in a Lanarkshire cotton factory as a boy and later in a lace factory, but also tried to improve his prospects with after-hours studies. In 1840, he left Scotland for the United States to study first in Ohio at Oberlin, a progressive religious training college and then later at the Union Theological College in New York from where he graduated in 1850. He held various ministries throughout New England and in 1852 married Harriette Cemantha Ingraham in Plympton, Massachusetts and they had three children, a son and two daughters.

This History of Oberlin College contains several references to Charles and his time there (including his first meeting with Miss Ingram [sic]) and extracts from letters that he wrote home about his experiences.
Whilst on leave in England in 1857, Charles met up again with his brother David who was now world-famous after his discoveries in Central Africa, and who was in the throes of planning the Zambezi Expedition. As David felt he could trust a family member above all others, he pressured Charles into joining the Expedition as the "moral agent". This meant Charles had to give up his ministries in America and also leave his wife and children behind. He was not to see them again until 1863 by which time he was broken by ill health and incapable of taking up his previous full duties of a church minister.

But yet again a year later, he left America for England to join David in residence at Newstead Abbey, the former home of Lord Byron, where he would help co-write the Narrative of an Expedition to the Zambezi and its Tributaries.

This was to prove nowhere as successful as David Livingstone’s earlier travel book, being a cobbled together and hastily written polemic against slavery and justification for the Expedition, with no mention of the failures, quarrels and setbacks. Quite simply, it was a cover-up. When Charles Meller, another abused member of the Expedition, heard of it, he scoffed and predicted it would be "a concoction ... a curious composition of untruth."  (As related earlier in this series of blog posts, major efforts and contributions by various individuals were either played down or left out altogether.)

After this, it is strange then, given the alleged poor state of his health and the prospect of even longer separation from his family, that Charles Livingstone accepted an appointment as British Consul in West Africa.

Sir Richard Francis Burton was the most famous renegade thorn in the side of the colonial office who had been sent to Fernando Po. But Burton stuck it out and when he was transferred to Brazil, Charles Livingstone replaced him. It is astonishing Charles managed to survive both there and at Calabar for nine years. Wives didn’t accompany men to such remote or dangerous outposts and it is likely that Charles only met his family on periodic leave breaks to England, his last being about eighteen months before he died.

As Consul, Charles was heavily involved trying to solve complications for British trading interests in the region. There were various crises within the Kingdom of Bonny, which culminated in the secession of Opobo in 1869, followed by small wars throughout what is now Nigeria. Charles also continued the proselytizing he was trained in with the result that local chiefs gave up their "cruel and heathenish ways" and converted to Christianity.

In an account of his experiences visiting a cannibal king on the Bight of Biafra published in Bell’s Messenger (read it in full here) the last few sentences suggest that Charles Livingstone was not quite as lacking in humour as some of his critics have suggested:

"Never before in Africa have I seen such powerful-looking men as the Okrika. I could not but admire their physical strength. As they sat before me chewing bits of chop-stick to clean their teeth and gazing earnestly at me, the thought occasionally flashed across my mind, ‘Are these cannibals wondering how a piece of roast Consul would taste, and which would be most savoury, cold Consul or hot?"

Charles was recalled in 1873, partly because of his unpopularity in thwarting the often unscrupulous ambitions of local British palm oil traders. (Details about this are sketchy and research into this unknown side to Charles might provide another angle to his character that is untrammelled by links to his brother.) Sadly, he never reached home and died "of African Fever" while on board ship on 28 October 1873. Even in his home country of Scotland, his death in the Edinburgh News of 22 November warranted just these few lines. 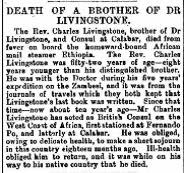 Although Charles could not have known it at the time, David had died six months before in a remote region of what is now Zambia and it took his faithful porters many more months to bring his remains back to Britain.

David Livingstone now lies exalted in Westminster Abbey, while Charles has neither known grave nor major memorial. His wife Harriette died in 1900 and his three children continued to live together in Colorado where his son worked as a metallurgist. None of them ever married and the last survivor, Charles, died in 1937. All were interred in the same cemetery - see Find-a-Grave.

Some Livingstone scholars such as G.W. Clendennen have been a little more considerate of Charles and it is worth reading his aptly-named article "Historians Beware: You can't judge a book by its critics; or, problems with a nineteenth-century exploration record" (see JSTOR 1994 archives) and in which he discusses the writing of Narrative ... and mysteries around journals and other works written by Charles. He also suggests that Charles was a more considered individual, less rash than David and even that he did not exhibit the same degree of loathing towards the Portuguese as his brother.

However, without any in-depth published biography to rely on, or descendants with intimate family knowledge to offer in his defence, Charles Livingstone must remain a lost enigma. Wholeheartedly disliked by so many, he appears a frustrated and lonely figure doomed to be overshadowed by the achievements and sanctity of his brother. And if he was also plagued by some form of clinical depression, it would not have been helped by enforced isolation and the repeated fevers that damaged or destroyed so many 19th Century Europeans who devoted much of their lives to Africa.

Posted by Regina of Arbeia at 3:18 PM