"Mutiny and Horrible Massacre at Sea" (3)

So what else can be found for some of the other people involved in this drama?

Captain Robert L. McNally, who knew he was about to die and left the poignant note reproduced in the first instalment of this saga (read it here) is variously described as simply British or as a native “of Dublin” in the news reports of the day, and with not much else to go on, proves difficult to establish his exact origins. There are a number of mariners of the same name and similar age to be found in the records, but none can be confirmed beyond doubt as being him.


What is intriguing, however, are the couple of sentences from The South Australian of 9 March 1949 indicating that Captain McNally was well-known in China and had also escaped another violent adventure some years earlier.

“… Poor McNally was well known and much respected in China. He escaped the dangers of the Borneo expedition, in which the Hon. Mr Murray was killed, but he was fated to a death of violence …”

This refers to an almost forgotten episode from the era when a new generation of merchant adventurers had ambitions to follow in the footsteps of Sir Stamford Raffles and open up trading opportunities in the Far East and other areas coming under British influence. While the story of Sir James Brooke, the White Rajah of Sarawak is well-known, much less so are the escapades of The Honourable James Erskine Murray who looked to the other side of the island of Borneo. It appears that Robert McNally was wounded in the escape and this is an interesting enough story to warrant a separate blog post in due course.


Thomas Gannon, the sixteen year-old navigator hero in this saga, appears likely to be the son of Thomas Gannon, a grocer, of 4 Duke Street [now Sardinia Street] in Lincoln's Fields Inn, London, and his wife, Ann Morling. The couple were married in Stepney in 1829, and their son Thomas baptised on 2 September 1832. 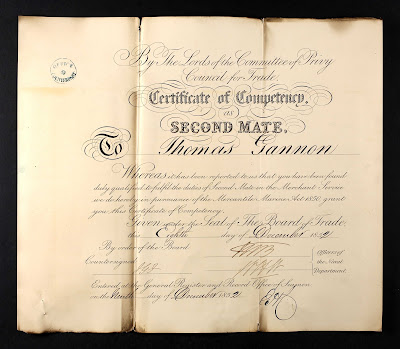 Other than this one for Second Mate in 1852, there are no further maritime certificates available for Thomas Gannon and his whereabouts remain a mystery until a surprising death notice for a Thomas Gannon born in 1832 (parents Thomas Gannon and Ann Morling) who died at the Alfred Hospital in Prahran [Melbourne] Australia in 1905. Unfortunately, the Melbourne cemetery records do not show where he was buried and the notice in local newspapers does not mention any family members.

When did he arrive in Australia? What else had he been doing between his brief moment of fame out in the Pacific Ocean at the age of sixteen and his death aged 73? Did he leave a widow or any descendants and did they know about his adventure on board the Amelia?


John Smith, the leader of the group against the mutineers was also known as Jan Smit, born in Rotterdam. With such a common name both in England and Holland this makes for even greater difficulty in trying to track him down.

The Glasgow Gazette of 18 August 1849 is one of the few newspapers to go into financial detail about what was saved and lost during the mutiny and massacre on the Amelia.


“The dollars amounted to 287,634. Among the papers found on board were three bills of lading with corresponding letters of advice and instructions from Jocker, Torre and Co. of Mazatlan, one for 150,000 dollars, consigned to Messrs. Turner and Co. Hong Kong but for account and risk of Messrs. Finley Hodgson and Co. of London, another for 120,000 dollars to Messrs. Turner and Co. of Hong Kong in payment for a cargo previously ordered for shipment in the Amelia on her arrival in China. The third bill of lading was for 1,379 dollars, in favour of Mr J. A. Durran of Macao; 16,304 dollars were landed, for which no bills of lading or other document could be found.

We have now the gratification to state that Jan Smit of Rotterdam, whose conduct on this occasion is above all praise, has been presented with 1,100 pounds by several of the insurance companies and also with a sextant by Ashdown of Finch Lane, with the following inscription:

Presented to Mr Jan Smit of Rotterdam, by the Corporation of the Royal Exchange, the Corporation of the London, Indemnity Mutual Marine, the Marine, and the Alliance, Marine Insurance Companies of London, in testimony of their high estimation of Mr Smit’s services, and their special appreciation of the fidelity and courage displayed by him in securing the schooner Amelia of Glasgow, and her valuable cargo, out of the hands of mutineers during her voyage from Mazatlan to China, in the year 1848. London, August 1, 1849.”

£1,100 was a vast fortune for an ordinary sailor to receive and would be around £80,000 today. Did Smit/Smith use his windfall to retire from the sea?

What happened to the inscribed sextant? Is it still held in some family collection or museum, or was it disposed of?

With every discovery, there are still many more questions flowing from this saga of death and drama on the high seas. If anyone reading this can shed more light on the story or has knowledge of any of the individuals involved, please do contact me via the comments.