Thomas George Bertram Armstrong (112544) of the 61st Company of the Imperial Yeomanry has quite a bit in common with Captain H.C.W. Hamilton (read about him here) as he also hailed from Ireland and his father was also a churchman, being The Reverend Robert Armstrong, A.M. This is his parents' marriage notice from the Belfast Newsletter, 29 June, 1876:

Their son, Thomas George Bertram, was born on 8 November 1879 at Stradbally, Athy, Queens, Ireland. He was the eldest of eight children, three of whom, according to a public family tree on Ancestry, immigrated to the United States and another brother died aged only 22 in Western Australia.

The Rev. Robert Armstrong’s name appears in various Irish newspapers in connection with marriages that he performed, usually between members of the military and the Cosby family of Stradbally Hall, Queen’s County. In 1896 he was appointed to the chancellorship of the Cathedral of St. Lazarian.

Nothing else can be found at this stage about young Thomas George Bertram. His service record can be located the National Archives of the UK, but is not available to view freely online. He joined the 61st (South Irish Horse - Dublin) Company of volunteers that was raised on 7 March, 1900 and served with the 17th Battalion Imperial Yeomanry.

He died at Marandellas on 7 August 1900 at just 20 from either meningitis or dysentery and his burial at Paradise is consistent across all the records. Sadly, no record of his name on any Irish Boer War memorials can be found and it is not known if his family had any plaque erected in his memory although a sibling who died in infancy is recorded in the Stradbally graveyard.

He was born in Hartley Wintney, Hampshire, in December 1879, and christened at Holy Trinity, Hawley, on 4 January 1880, so thus also only 20 when he died. His father Thomas Davis was a blacksmith, his mother Sarah was nee Pullen. In the 1881 Census return they lived at the "Blacksmith's Shop" and one year old Sidney had three elder sisters and one brother, George. In the 1911 Census Return, Thomas Davis, aged nearly 70 was still practising his trade.


Noticing that George was close in age to Sidney, I found that he, too, had joined the 50th Company of the 17th Battalion Imperial Yeomanry with a similar service number that suggests they enlisted at the same time. He was Corporal George William Davis (4712) who returned safely from the war, becoming a blacksmith like his father and living at Blackwater, Hampshire, with his wife as per the 1911 Census Return.

Being part of the same Field Force, it is hoped George was with his younger brother when he died. To have a member of the family near to him at the end would surely have been a comfort to poor Sidney that few others like him would have had.

His grave marker has a major error in the date - 1906 instead of 1900 - and given the general disorder connected with burials at Paradise, the placement may also be incorrect.


Next is Trooper Albert Edward Shaw (15507) of the 75th Sharpshooters Company, 18th Battalion Imperial Yeomanry. He has a service record with the National Archives in the UK which again is unavailable digitally and finding the correct man via the usual online sources or via Ancestry or FindMyPast is proving elusive without exact age as there are too many men with the same name. Being a Sharpshooter, a rural background is likely.

He died on 19 June 1900 and from the not always reliable UK Soldiers' Effects records the only clue is that he was married, his widow's name Helen (could be Ellen), but with no address given for her again difficult to find more about him.

There is no marker for Albert Edward Shaw either and it doesn't help he has been confused with another Shaw who, although in a different company, was also part of the same Battalion, also a Sharpshooter, and is either buried at Bamboo Creek or also in Marandellas, as per newspaper reports.


Trooper George Frederick Shaw (12249) of the 67th Sharpshooters came from Ayrshire, Scotland, one of ten children of Charles George Shaw and Flora Campbell Whiteside. Their youngest son, he was born 24 June 1876 and died on 29 May 1900 (the National Archives erroneously have 1901).

The family tree does not show any brother called Albert Edward Shaw, but given they were both Sharpshooters and, as with the Davis brothers above, perhaps some cousin connection is possible, although there are no newspaper articles that mention the death of Albert Edward Shaw as does this one about George Frederick Shaw:

It is with deep regret that we notice the announcement of the death of Mr. George F. Shaw - youngest son of Mr. and Mrs. C.G. Shaw, Ayr - which took place at Marandellas, South Africa, on the 29th May.
To the people of Cumnock, Mr. George’s personality was perhaps not so familiar as it was to the farmers of this and some of the neighbouring parishes. By them he was heartily esteemed for his frank and courteous nature. He was a young man of great promise, and his death, coming to him in his 24th year, must be a sad blow to his universally respected parents, for whom the deepest sympathy is being expressed.
It might be mentioned that young Mr. Shaw was one of the gallant Ayrshire civilians who volunteered for active service in South Africa. He joined the City Imperial Yeomanry, and it was with that regiment he went out.

Here is a link to an image of C.G. Shaw, Clerk to the Ayrshire Council, and a former factor to the Marquis of Bute at Dumfries. The local newspapers also carry reports two elder brothers of George Frederick also joined the war, being James Edward Shaw and Phillip Armstrong Shaw. Their records are beyond the scope of this project, but it is presumed they survived.

Albert Edward Shaw and George Frederick Shaw are recorded next to one another on the Boer War Memorial in St. Martin's-in-the-Fields in London. 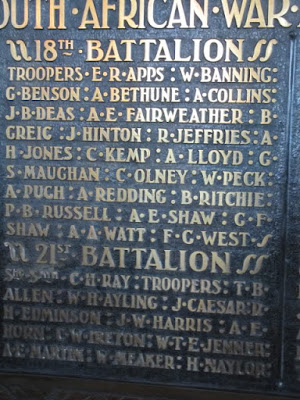 All posts in this series on Digging the Dust

Posted by Regina of Arbeia at 3:41 PM