It is always a pleasure to discover an interesting individual who was greatly celebrated in his day but is completely forgotten now. ﻿﻿﻿ ﻿﻿﻿One larger-than-life character came to light for me after reading recent media reports announcing the reopening of the home of William Hogarth in Chiswick, West London, after a closure of some years. Hogarth, of course, is very well-known for his illustrations of 18th Century life (perhaps lesser so for his association with the Foundling Hospital), but it was a brief mention of his house once having been lived in by one Newton Treen Hicks, a popular melodramatic actor, that sent me digging in the dust.

Here was a man whose over-the-top acting style was loved by thousands of London theatre-goers and led to an expression that was immortalised in the popular slang of the era, as can be found in Eric Partridge's Dictionary of Historical Slang:

There does not seem to be any published biography of Hicks, but from the many colourful facts I unearthed in old newspapers and court documents, he is certainly worthy of rediscovery.
He was sometimes referred to as a "transpontine" actor and the scathing London critics of the day had a snobbish attitude towards any acting done south of the river, i.e. at the Surrey Theatre in Lambeth where Hicks excelled.
Critics haven't changed much and just like those today who look down on any entertainment that is popular, they were just as dismissive of the rowdy, cheering audiences who appreciated the gusto of Hicks' perfomances.
In his career, Hicks played everything from Macbeth and Hamlet to Mr. Rochester in Jane Eyre and Rob Roy, from the Count of Monte Cristo to gypsy kings, pirates and swashbucklers of every persuasion, but it seems he was best-loved when being comedic and playing to excess in melodrama and farce.
﻿﻿ ﻿
﻿﻿﻿ Hicks probably lived beyond his means; he was a part-time publican as well as an actor and occasionally used the name of Theodore Hicks. It appears he also wound up in debtors prison on more than one occasion. The London Gazette has several references over a ten year period to him appearing before the Court for Relief of Insolvent Debtors. Some vivid descriptions of this Court in operation during the mid 19th Century (including Dickens in Pickwick Papers) can be read here.
﻿﻿﻿﻿ ﻿﻿﻿﻿﻿﻿﻿﻿﻿﻿

The actor's temperament was probably as combustible as some of the characters he played, and an 1837 court case which "excited much laughter" over an incident at Sadlers Wells Theatre sounds like a plot from one of his melodramas.
After a performance and while still in his costume as a Knight, it seems he first tried to set fire to, and then drown head-first in a water butt, one James Shankes, a scene shifter who was in charge of creating fire and brimstone for the play and had supposedly spotted Hicks' inappropriate attentions towards a young girl in the ballet and dared to report the same to her father.
Hicks was fined 6s. 8d. for his attempt to send Shankes to the "nether regions" but was "strongly congratulated by his professional brethren at the result". The unfortunate James apparently hightailed it to another theatre!
﻿
﻿

There are a number of references to the numerous injuries Hicks received from the stage antics and leaps for which he was well-known and his obituary of 1873 states he was possessed of "extraordinary strength, combined with indomitable courage" [and]

"While fulfilling an engagement at Colchester a fire broke out, and he, at the hazard of his life, saved two children from the flames by ascending a ladder, when even the firemen and all around refused, succeeding in reaching the top of the house where the children lay, and bringing them down in safety. The ladder was absolutely on fire while he was upon it, and went to pieces the moment he had reached the ground."

I have been unable to find a serious portrait of Hicks, but the tinsel prints by John Redington were popular for many years for use in children's cut-out theatres. Those on this page come from Toy Theatre website and a number of them can also been found in the digital collection in the New York Public Library.

Hicks married Elizabeth Bell in 1837 and acted with her in a number of productions but in the Census Return of 1871, when he was living in Hogarth's House, the name of his wife is listed as Sarah - possibly he was then widowed and she was a companion or housekeeper. Hicks' obituary states that he had suffered from "brain softening due to overstudy" for some years before his death.

Numerous reviews of Hicks the actor can be found in newspapers of the era: some critics described him as "perfection" but more often than not, they were disparaging or mocking about his enthusiastic and "over-loud" performances, but if the audiences loved him then that is all that mattered.

Here is a website detailing the history of the Surrey Theatre in Lambeth.

Theatrical playbills can be found at the East London Theatre Archive from the Victoria & Albert Museum. 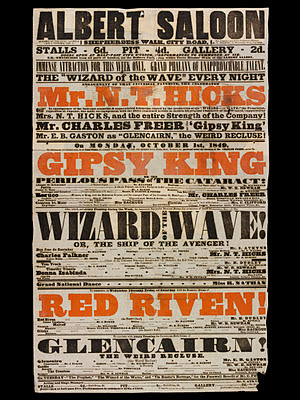 Posted by Regina of Arbeia at 5:24 PM