Before you could say "Herman Boaz!"

Following on from research into forgotten female magicians on my other history blog, I came across several advertisements in late 18th/early 19th century newspapers that sent me scurrying for the dictionary.
Back then you didn't go to just some illusion or magic show, you went to an "Hurlophusicon and Thaumaturgick Exhibition" and were amazed by a self-acting Horologium machine powered by means of an Alhadida and a Cathetus and then had your thoughts transferred by Steganographical or Paligenesia operations not to mention experiencing Pixidees Metallurgy you probably would never forget ...
The perpetrator of these fantastically descriptive shows was one Herman Boaz, also known as Sieur ("sir" in Old French) Boaz and although he performed throughout Britain, he seems to have made Scotland his main base.
The Magicpedia entry on him is disappointing - and with inaccurate dates - and seems to conclude he was "small fry", yet the number of advertisements and articles about his exhibitions and displays in newspapers and magazines from 1777 onward would suggest he was very popular.
Even late in the 19th Century many years after his death, tales or reminiscences by people who met him or saw his fantastic shows were still being published.
Some of his more bizarre acts included a hen that laid twenty eggs in a row on a table in front of the audience and the withdrawing from the innards of a hot "roasted jigget of mutton" cards on which ladies in the audience had earlier written their thoughts. One wonders what state the cards would have been in?

Well into the 19th Century he was still at it. Cheap One Shilling seats in 1788 had inflated to Two Shillings by 1804 (about £3.40 in modern money).
Note the weird and wonderful words of the many "curious operations" in this next announcement that also included "Pyrotecknomancy with a Variety of Chartomantic Deceptions" in which will be found much to improve the mind, including a "most useful lesson to youth in against the pernicious and fatal consequences of gaming". What a pity there were no movies in those days, as the mind can only boggle at what it was all about!

Boaz died in straightened circumstances in Edinburgh in his 84th year in January 1821 as this obituary in Blackwoods Magazine relates ... 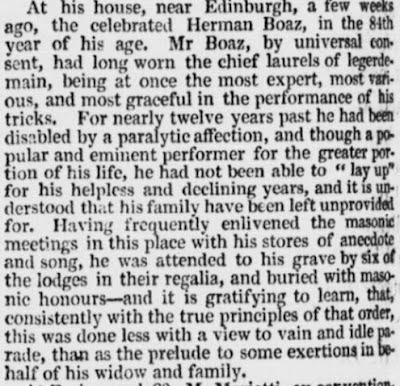 ... and the following is an advertisement for a benefit on January 19, 1821 to raise funds to help Boaz's widow. 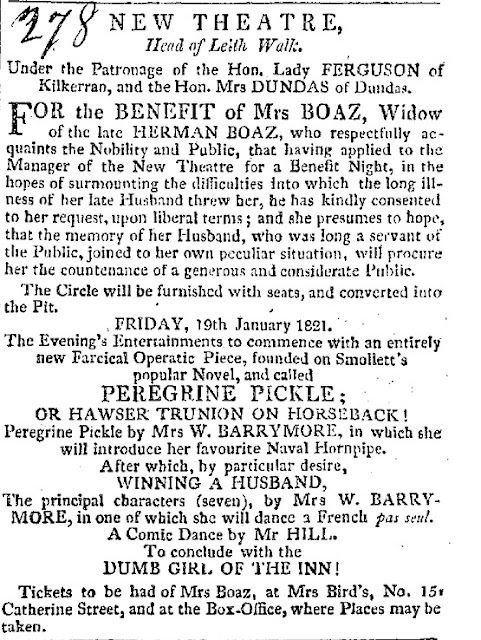 Note actress Mrs W. Barrymore.  No connection however to those other stage Barrymores, as according to Wikipedia on Maurice, the patriarch of the American family, he "borrowed" the surname - probably from the husband of this same Mrs W. Barrymore.

No images can be found of Herman Boaz but other searches have located a Marriage Bond for his marriage to Elizabeth Killick in Surrey in 1774, also a romantic rebus poem on the city of Bath that he wrote to Craftsman Weekly that same month, and a note of his contribution in 1806 of three guineas towards the erection of a pillar to Lord Nelson at Edinburgh.
There doesn't seem to be any Mrs Boaz listed in the Scotland's People archive and if he had any other descendants, they have done the usual disappearing act.


The second little advertisement attached to this Boaz one from 1801 captured my attention in that it informs me, by permission, Polish Nobleman, Count Boruwlaski, only 3ft 6ins high, 62 years old, is now available to receive company at Mr McRorie's at East Side for only One Shilling. His memoirs in French will cost you another Five bob.  No extra charge for English translation.

After reading his Wikipedia entry and some swift research, I realise I probably walked right past the Count's resting place when visiting Durham Cathedral last year and apparently his little grave can be seen near the main door, marked by a stone only 15 inches square that simply reads "J.B."


Oh why did I know nothing of you before, dear little Count, you are just one of the reasons why I so love the quirks and serendipitous discoveries while digging in the dust of history.

More on Count Josef Boruwlaksi in Durham here and you can read those five bob memoirs for free at the Internet Archive. 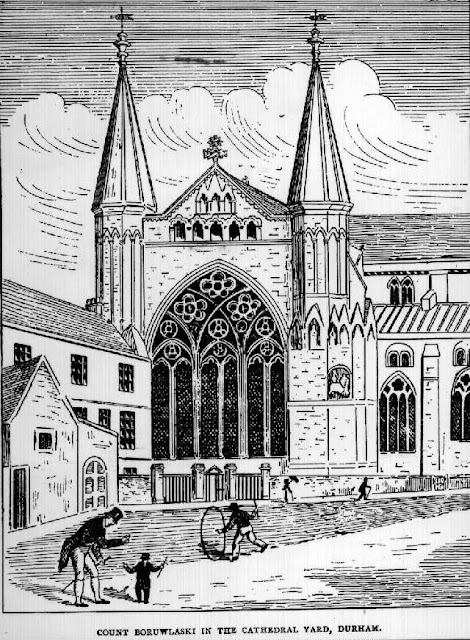 Posted by Regina of Arbeia at 2:55 PM