An "impression" on a king

The Chubb lock is something that seems to have been around forever and pondering the origin of the trade name, I came across an odd and amusing statement that is mentioned in the official history here on the company website and with slight variation in other places, such as this statement from a website devoted to Wolverhampton:

The Chubb lock supposedly became popular as a result of the interest generated when the Prince Regent accidentally sat on one which still had the key inserted.

It is well known that the Prince Regent (George IV) was almost the size of a brick outhouse, but what was he doing sitting on a lock in the first place? What were the circumstances?
The Oxford Dictionary of Biography is prosaic about the story -

The detector lock rapidly became regarded as the best of its kind, and was recommended by the Admiralty, but the popular legend about its success arising as a direct result of the prince regent’s sitting on it during a visit to the docks is unsubstantiated. 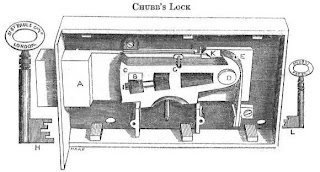 Apocryphal perhaps, but more colourful detail can be found in this Australian newspaper article from 1951 in which the origins and history of the Chubb lock since 1818 were told by a descendant, the Hon. George Chubb. The article varies somewhat from other references but tells more about the episode with the Prince Regent.

Not only did it [the lock] defy the lock pickers, but it also told its owner, in some mute fashion, if an attempt had been made to pick it.
At the same time there was an epidemic of thefts of naval stores at Portsmouth.
George III [sic. IV] heard of Charles Chubb’s lock, and summoned him to Portsmouth for a demonstration (the monarch was at the time living aboard the Royal yacht).
Charles Chubb arrived with his lock, was ushered into a cabin, and instructed to await the arrival of the King. He placed his lock on a nearby chair, and started to wander round the cabin, examining the pictures.
While he was occupied in gazing at the seascapes, King George swept into the cabin and sat down right on top of the lock.
‘It’s an old joke in our family that that lock made such an “impression” on him that he granted us a Royal Warrant, which we’ve had ever since,’ said the Hon. George.

The article also tells how Chubb’s fame was sealed by the time of the Great Exhibition of 1851:

One of the great attractions of the exhibition was the Koh-i-noor diamond. It lay winking and glittering in a fabulous sort of birdcage, mounted on a pedestal-safe.
This strange contraption (reported Family Herald on May 31, 1851) ‘protects the Koh-in-noor diamond and two smaller diamonds. At night, on the touch of a spring by the custodian, these precious gems sink into a massive iron box of impregnable strength, prepared by Messrs. Chubb, and fall into a pedestal of solid masonry’.

Although the company has evolved and moved beyond locks and keys into security generally, everything else you might want to know about the Chubb family, its business in Wolverhamptom, and its locks in general can be found here:

Posted by Regina of Arbeia at 4:06 PM