By jingo, it has to be Mazawattee!

Inspired by this informative and delightful prize-winning short video made by my cousin Alwyn Scott about Earl Grey and his famous Tea, I started thinking about other teas that might have once been popular but have disappeared.

One brand that has and I remember well as a child was Mazawattee tea. Mistakenly, I had always thought it an African name, but the Mazawattee Tea Company was founded in England by John Boon Densham in the mid-1800s.

Diana James, author of the book The Story of Mazawattee Tea, in this article in The Sunday Times of 24 May 1998, describes the origin of the name as

“... an exotic combination of the Hindi word Mazatha, meaning luscious, and the Sinhala word watte(e), or garden. On the advice of the firm’s printer the “tha” in mazatha was excised, and thus Mazawattee Tea was created. This strange linguistic hybrid, which paid scant respect to native pronunciation, proved to be remarkably popular.”

She further tells us:

“People were fascinated by this unusual name, and so it achieved the objective of bringing the firm’s tea to the forefront of the market. It gave rise even to several cartoons in the newspapers of the day. One, which was rather racially patronising, showed a little page-boy of African descent offering a silver salver displaying packets of tea. The balloon from the boy’s mouth encloses the pun: “Massa-wot tea?” (“Master, what tea?”)

It was during this period that a famous painting was developed; a painting which is today one of the few lasting legacies of Mazawattee Tea. Entitled “The Old Folks at Home”, it shows a smiling, bonneted and shawled grandmother, together with her bespectacled grand daughter, happily drinking cups of Mazawattee Tea. This painting was used extensively on posters, tea packets - and large enamelled metal advertisements which were in those times the equivalent of today’s more sophisticated hoardings.”

The company knew how to get attention and the brand became strongly associated with the British Empire.

This image was used on postcards to promote the arrival in an area of the tea wagon drawn by a team of zebras and driven by men from the colonies. As zebras are notoriously difficult to train, this was an amazing success story.

A full column advertisement from The Ipswich Journal of 19 September 1896 demonstrates the Empire connections well. John Bull representing Britain faces a critical world with Mazawattee in hand, and Australian cricketers, King of the Ashanti, Paul Kruger and the even the relieving column for the Matabele Rebellion in Rhodesia all owe some kind of allegiance to Mazawattee! 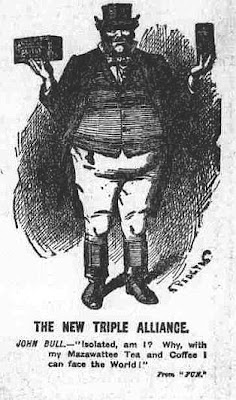 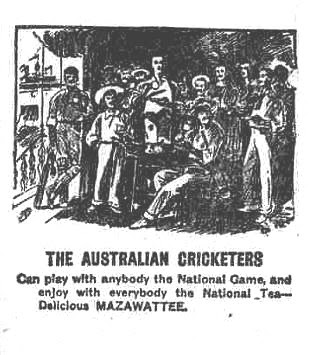 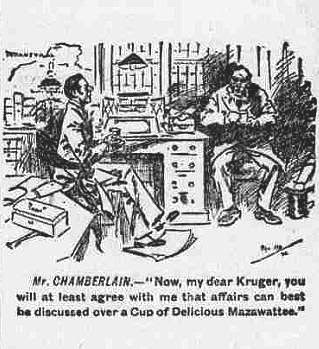 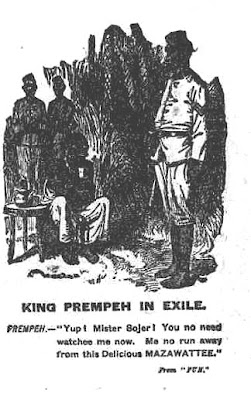 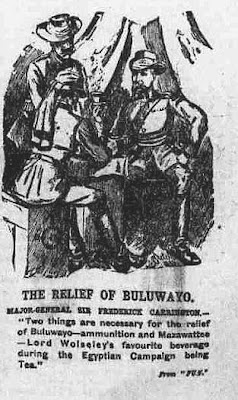 In later years, the declining fortunes of the company hadn’t been helped by its warehouse at Tower Hill and a factory at New Cross being destroyed by the Luftwaffe in World War II.  By the 1960s, Mazawattee had disappeared from the shelves. Its tins, cards, and posters are still popular with collectors.