Few people will be aware that there was once a short-lived Russian colony in the Horn of Africa. There are various scanty versions of this episode to be found written in English, with the most detailed reports in French or Russian, and the true facts are hard to establish with any certainty, but the story goes something like this.

In January 1889, a steamer escaped the detection of French patrol vessels and slipped into the Gulf of Tadjoura. On board was a group of around 200 Russians, including 40 monks and several women and children.

The group was led ashore by Ataman (supreme Cossack leader) Nicholas Ivanovitch Atchinoff [or Atchinov, Achinoff, Atchimoff] who had decided to gain a Russian foothold in Africa under the guise of a religious enterprise.

After camping overnight, the next morning they held a service of thanksgiving on the beach. This was led by Archimandrite (a monk-bishop or abbot in the Orthodox Church) Paisij.

After the prayers, vodka flowed, and Atchinoff gave a traditional toast and announced that he intended to go beyond the expedition’s ostensible claim of just establishing a religious community and invited his fellow Cossacks to indulge in good old pirating and plunder of caravans as well.

What the monks thought of this is difficult to know, but the local French Governor soon got wind of it and sent an urgent message to Atchinoff to inform him that if he committed any hostilities against the natives in the territory, French forces would act against him. But given their heads, the Cossacks had already started a rampage, raiding local mountain villages and herds. Allegedly they also kidnapped and raped a young local girl in frustration at losing out on a gold and silver caravan. The local Sultan demanded reparations but Atchinoff treated him with contempt, paid him off and then proceeded to tell the local chiefs that they were now under the protection of the Russian Tsar.

Italy, with its own interests in the area, was the first country to express concern and when the news reached Paris, all hell broke loose in diplomatic relations between France and Russia. The French demanded answers and the Russian ambassador swore that it had nothing to do with his country, that it was a private enterprise undertaken without the sanction of the Tsar or the Russian military. The French Government then ordered its Admiral, Jean Baptiste Olry, to the gunboats.

Meanwhile, after scouring the local area, Atchinoff returned to the base and announced he had found a new place for settlement, an abandoned Egyptian fort at Sagallo. There, he raised the Russian flag and renamed Sagallo “New Moscow”.

A make-shift chapel was initially erected among the ruins for the monks and they were accommodated in the surrounding blockhouses while the other members of the expedition had to make do with tents in the scorching heat. Atchinoff tried to repair the fort but he was starting to lose control of his men as discipline deteriorated and the Cossacks were only keen on booty from the wealthy caravans that headed to Abyssinia (Ethiopia).

Admiral Olry then arrived and via the local governor demanded Atchinoff take down the Russian flag, cease and desist from plunder, as otherwise his naval division would go into action against him.

Atchninoff refused to comply, stating that he was on a mission from the Tsar, who was the only one who could change his instructions and that he had no intention of shifting out of New Moscow. He then ordered the uncovering of his machine guns to show he meant business.

There was quite a bit more argy-bargy until Admiral Olry got fed up with the ridiculous state of affairs and decided to fire a few shells to make the Ataman think again. Several Cossacks were injured and the Russian sources suggest some women and children were killed. Atchinoff surrendered swiftly and the French moved in to collect all the remaining guns and rifles. The members of the expedition were then assembled on the beach and sent to Obock, another small town in Djibouti, for repatriation from Suez to Odessa.

The Russian Government naturally enough appeared to be furious with Atchinoff and accused him of disobedience to the Tsar, defrauding the Russian Treasury and committing acts of piracy, but he seems to have avoided serious retribution. Some sources allege he was pardoned and ended up in Paris. Archimandrite Paisij apparently returned to Ethiopia.

This abortive attempt at colonisation by Russia in Africa could be the subject of a most interesting book in English. The French and Russian sources report on this extraordinary episode in quite divergent fashions, so whether the Ataman truly acted alone or he was in fact some sort of secret agent of a Russian Government hoping to get its own toe-hold close to the Suez Canal or wanting to establish a base where it could also take part in the Scramble for Africa makes for interesting speculation.

This image from Journals des Voyages No 615 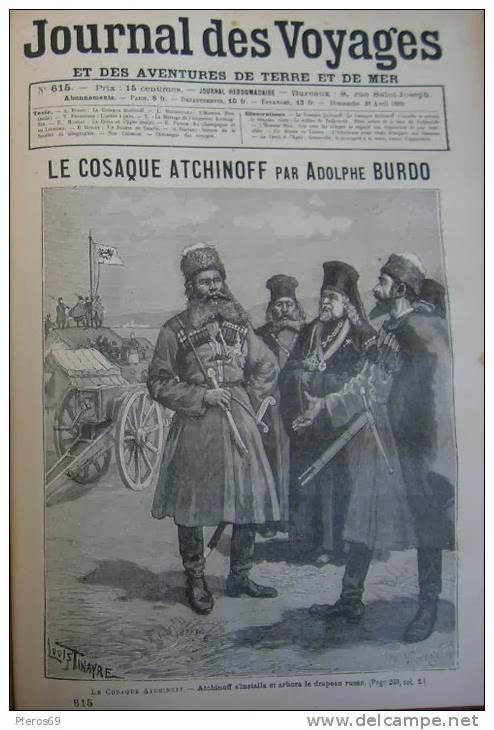 Posted by Regina of Arbeia at 3:32 PM