When major natural disasters strike in the world today, uneasy political relationships are often put aside as many nations reach out to help with the injured or homeless and such offers are usually eagerly accepted by the afflicted country.

But it was one such disaster that led to an international event that is now largely forgotten and was known as either the “Jamaica” or “Kingston Incident”. What is remarkable is that it wasn’t a clash between countries known to be uneasy with one another, but it was the good friendship between Britain and the United States that was put in jeopardy.

One of the biggest earthquakes ever recorded up until that time hit Kingston, Jamaica, on 14 January 1907. Up to 1,000 people were killed, many thousands made homeless and 85% of the buildings in the capital were damaged or destroyed. An extensive photographic record of the event can be seen here on Flickr.

Overseeing the rescue and recovery process was the Governor of the island, Sir James Alexander Swettenham, an experienced British administrator who’d had gubernatorial roles in the Straits Settlement and British Guiana prior to his appointment in Jamaica. (The role his wife played is described on my History Bucket blog.)

Much detail is available in online newspaper archives about the incident. In a nutshell - when the American Rear-Admiral Charles H. Davis Jr organised a rescue and sent in the Marines in the torpedo boat Whipple from Guantanamo Bay followed by the battleships Indiana and Missouri carrying medicines and supplies, he received short shrift from Swettenham who rejected the help offered by the Americans and demanded that they decamp.

This led to outrage in America and some red faces at Whitehall which was quick to send an apology to Washington. Worldwide, there was much chatter about the pros and cons of America’s actions and Swettenham did have some surprising supporters. France saw it as officiousness and thought the United States had used the disaster as an excuse to grandstand in the West Indies.

ALL SCORE HIM FOR NOT LETTING DAVIS GIVE HELP

Action of Gov. Swettenham of Jamaica is Universally Condemned in London

NO EXCUSE FOR LETTER

Officials of the Foreign Office Do Not Attempt to Pardon His "Unaccountable Sarcasm."

MAY HAVE LOST HIS HEAD

And a browse of the many other newspaper headlines in Chronicling America are similar:

“Aid is Withdrawn From Kingston After Insult” (Rock Island Argus)

“Somebody has Blundered” (Albuquerque Evening Citizen)

But this was not the worst of it!

In the days following, reports of a morally damning nature emerged from Kingston about the attitude of the ruling British elite resident in Jamaica, referencing another man, Sir Alfred Jones. This inflammatory article from The San Francisco Call shows them in an appalling light according to a couple who had just arrived back from Kingston.

Sir Alfred and Ladies Drink Wine as Dying Shriek About Them

"We know Sir James Alexander Swettenham very well," said Mrs. Craig. "He is nervous, irascible, stubborn and prone to fly off on a tangent. Socially he is delightful. But I think that his action was influenced by the desire to stand well with Sir Alfred Jones, who dominates Kingston.
"The night before the earthquake we were present at a dinner to Sir Alfred Jones' party of thirty in the Constant Springs Hotel. On Monday afternoon relief parties were carrying the wounded aboard the Port Kingston on which the English party had taken refuge. There the ship's surgeon enlisted a couple of young Englishmen and set them to work sawing off limbs. The anesthetics gave out before the work was half finished, so that the amputations had to go on while the poor wretches were perfectly conscious. Their shrieks were heartrending.
"Through it all Sir Alfred and his fine ladies and gentlemen drank champagne and dined and made merry. The high-bred ladies tripped across the bloody decks, regardless of the dreadful scenes about them. That night the surgeon and his amateur assistants worked ever minute.In the morning some of the ladies complained to Sir Alfred that, the shrieks and groans of the sufferers disturbed their rest.
"To please them. Sir Alfred ordered every stranger, well or injured, removed from the vessel. None of Sir Alfred's party lifted a hand to aid these sufferers. Not a sympathetic or kindly or generous deed can be ascribed to them. The Americans were generosity itself. The Jamaicans blessed them."

Was it really true? Or a media beat-up? Or did the Craigs have sour grapes of a personal nature they wanted to get off their chests?

Other snide and nasty reports flew thick and fast. Go here and here to read other examples of similar stories about “British Brutality” towards American refugees. Then, on the other hand, there is this report, by Dr Arthur J. Evans who was there doing the amputations and who puts a very different spin on things with the high society ladies rolling up their sleeves and helping him without complaint.

Who to believe? From all of this, it seems clear there were not just personal animosities at play but possibly some latent political antagonism between the British and Americans in Jamaica that blew up as a result of the disaster.  Sir Alfred Jones was a prominent and influential ship-owner who no doubt made enemies. On his return to England, he furiously denied the reports and also roundly condemned the gung-ho attitude of the Americans to land their Marines without first going through the normal formalities with the resident Governor even though the action had received the approval of the President, Theodore Roosevelt.

(As a curious aside to all of this, two years later Chambers M. Craig committed suicide, apparently having lost his money. This poses questions as to possible underlying motivations for speaking about Sir Alfred and his guests in such a disparaging light.)

Sir Alexander Swettenham’s career was of course ruined. He had no choice but to resign, and slip out of the public eye. He seems to have remained a low-key figure for the rest of his life until he died in Switzerland in 1933, leaving just a few hundred pounds to his wife. It is somewhat telling as to the disgrace he continued to suffer in that the Oxford Dictionary of Biography fails to give him even a modest few lines while his brother, Sir Frank Swettenham, has extensive coverage.

Was Sir Alexander on the brink of a nervous breakdown and not really aware of what he is doing when he rebuffed the Americans in such a public way? Was he really trying to please the influential Sir Arthur Jones as was suggested? Government House had been badly damaged and like everyone else his living conditions must have been reduced. These days such behaviour by any prominent individual could be excused by psychological stress and no doubt he would be treated more sympathetically, but in Swettenham’s button-lip era that was riddled with protocol and pomposity and the hiding of true feelings, there was no such thinking. The Governor had blundered as a diplomat and so he had to pay the inevitable price. 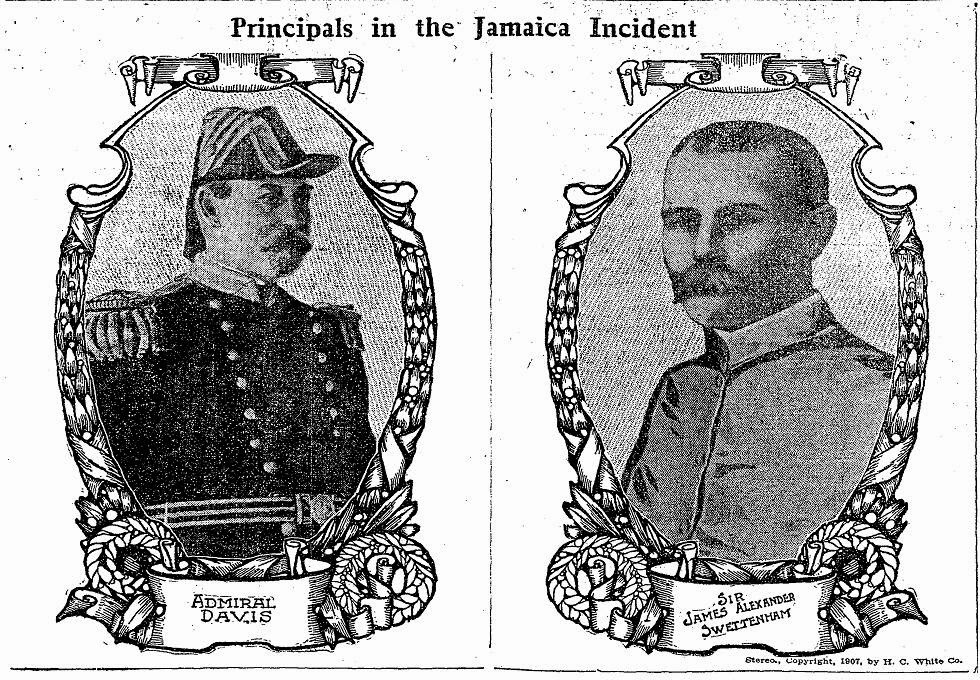 In August of that same year, the Americans were still chewing over the incident. This article in the New York Times alleges murky details under the dubious heading “Double Dealing of Swettenham”. It tells of the state Kingston was in post-earthquake with prison riots, but also implies a dismissive attitude towards the capabilities of residents and the negro police force. The article also reproduces (and denies) all of Sir Frank’s written defence of his brother’s behaviour with his strict adherence to the rules relating to armed landings.

And here is Sir Alexander’s infamous letter to the Rear-Admiral which is fairly innocuous and hardly worth all the fuss. It displays a degree of formal sang-froid but perhaps it was the savage observation in the last paragraph that did the damage, British irony often being lost on Americans!

With its contrasting cast of characters showing what can happen to important people in the wake of a disaster or having their noses put out of joint, this whole episode could be the basis for a great book or even a film.

As a footnote to this story, another eminent British administrator died in the Kingston earthquake. He was Sir James Fergusson, and had served as Governor of South Australia, of New Zealand and of Bombay.