Fertilisers for Turnips and the great British backbone

While there is currently much distress around the world over the difficult repatriation of innocent human remains from a war zone, it is worth remembering in centuries past very few of those who died in conflicts – civilians as well as soldiers - were accorded much dignity or respect at all and often did not even have any proper burial. Not only would their belongings be looted, but their useful body parts would be appropriated, such as the famous “Waterloo Teeth”

In a book about Sister Janet Wells that mentioned the terrible conditions during the Russo-Turkish War of 1877-78, this brief statement surprised me and I wondered how true it was:

“Thirty years later a ship docked at Bristol carrying thirty tons of human bones from Plevna, the cargo was ground and used as bone meal to enrich England’s parks and gardens.”

It is somewhat difficult to find an authoritative account on the use of human bones in fertilisers, but reading through archival newspapers online there are many references to the practice, often completely at odds with one another.

The Battle of Plevna took place during 1877-78. Thirty years later suggests the ship would have docked in 1907 but that must be incorrect as there are a number of newspaper reports discussing the alleged importation of bones around three years later, such as this paragraph in The Edinburgh Evening News, 10 October 1881, that says it makes little business sense. 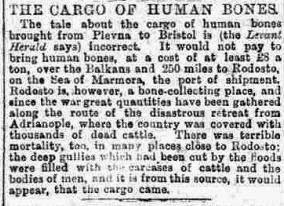 The statement in the book can be found around the Internet in blogs, bulletin boards and especially in military chats. One of the sources switches the tonnage from thirty to thirty-thousand! These sources discuss the use of battlefield bones quite casually, stating that it goes back a long way - that in the 1820s and 1830s most of the bones came from the big battlefields such as Waterloo, Leipzig, Austerlitz and were being dug up and sent to Yorkshire or East Anglia or Scotland to be ground into fertiliser and that quite a number of companies were involved.

Who were these companies? Who were the gatherers and the shippers? Has any historian given this unusual topic serious academic scrutiny? Were any laws passed to ban the practice, if in fact it was taking place?

There are many letters to be found in the old newspapers decrying the practice, such as this one in the Portsmouth Evening News in 1881, when a correspondent asks:

“... whether such outrages on decency cannot be prevented by law. Could not any application of human remains to such purposes as were contemplated by the importers of the cargo in question, be forbidden by Act of Parliament?”


Bones for Hull, Westmorland Gazette,16 November 1822
What is even more astonishing is that many books on the science and history of fertilisers, plus recent university treatises, dissertations and articles, all mention the founding father of the fertiliser industry, Justus von Liebig, and include his inflammatory hyperbole, which smacks of some underlying personal sour grapes or other issue that he had with England.

“England is robbing all other countries of their fertility. Already in her eagerness for bones she has turned up the battlefields of Leipsic and Waterloo and of the Crimea; already from the catacombs of Sicily she has carried away the skeletons of many successive generations. Like a vampire she hangs upon the neck of Europe, nay, of the whole world and sucks the heart blood from nations without a thought of justice towards them; without a shadow of lasting advantage to herself.”

Is it his ironic way of saying that much of Europe or the Crimea was now [mid 19th century] wasteland because its war dead were ground up to keep English turnips growing, instead of German cabbages, Italian tomatoes or Russian buckwheat?

It seems a ludicrous statement to be perpetuated in our modern age, that England had sole monopoly on this trade. Von Liebig died over 140 years ago and to keep quoting it without investigating its real basis in fact reflects a certain amount of complacency or laziness in research methodology. All sorts of countries could be just as guilty of exploiting their own battlegrounds. Somebody had to be engaged in the trade of digging and exporting them. As recently as 1924, the French authorities were having to investigate a report and deny that bones from the Battle of Verdun and Mort-Homme were being used for this purpose.

There is probably no doubt that all kind of bones – men, horses, oxen - from Waterloo, Plevna and numerous other 19th Century battles could have been mixed up and sent to countries around the world ... and let’s not ever forget what the Nazis also did with bones since then. Our veneer of civilisation is very thin and, as we have seen in recent events in the Ukraine, we are still frighteningly close to the barbarities that have riddled history.

On a less sombre note, this report from the Preston Chronicle dating back to June, 1870 has a few (now politically incorrect) things to say about how the Egyptians exploited their mummies for the same purposes. (The war referred to is most likely the Crimean.)

And it is worth reading to the end for its amusing suggestions about turnips, British backbones and what might befall those who lie in the vaults of the cathedrals. 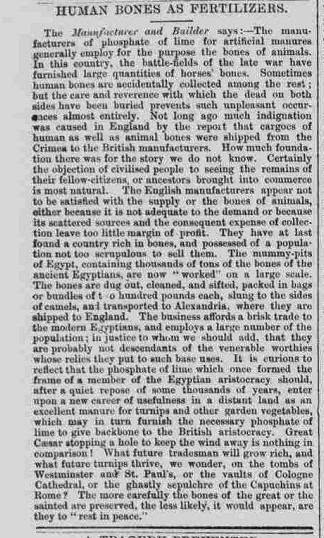 Finally - another image to think about. This poster from World War I. Bones to make munitions to kill men and make more bones .... all just a form of recycling.

Posted by Regina of Arbeia at 5:17 PM