The most competent, yet least appreciated. Gunner E. D. Young - The Zambezi Expedition (9)

An article in the Hampshire Telegraph and Sussex Chronicle of Saturday, 27 June, 1891, under the heading Naval Notes & News (from our Own Correspondents) draws attention to one of the most competent men ever to serve in the quest for opening up of the Zambezi and Shire Rivers, yet is probably the least known and least appreciated: It summarises the achievements of Edward Daniel Young exceptionally well and is included here almost in its entirety:

"I cannot see how the Admiralty can possibly ignore the claims of Mr Edward D. Young, a warrant officer, who this month retires through age from the position of inspecting officer of Coastguard at Dungeness, to some special recognition of his exceptionally brilliant career. He has unquestionably made the most distinguished record of any man in the service who has once served before the mast during the past two generations and, unlike some others who have performed special services of great merit, he has at all times done credit to the position in which he has been placed. The name of Mr. Young was, a few years since, on everybody’s lips as the intrepid leader of the expedition which disproved the tale of the death of the great African explorer, Livingstone, and the man who subsequently performed the difficult feat of planting on the breezy uplands of Lake Nyassa the memorial mission settlement of Livingstonia.
When Livingstone was on his official expedition, the Pioneer, steamship, was built and sent out to him, and Mr. Young, then a naval warrant officer, was selected to command her. This service he performed to the satisfaction of Dr Livingstone, of the Admiralty, and also of the Royal Geographical Society, so that later on, when a leader was required for the Livingstone Search Expedition, Mr. Young was immediately selected. He designed a steel boat [see footnote*], which was made in sections, and with this and a small party he left England, ascended the Shire River then, hiring men, the boat was taken to pieces and carried on men’s shoulders up some fifty miles of pathless and precipitous forest. Having reached the lake, it was again screwed together, and in it the intrepid leader and his trusty men circumnavigated the lake until they struck across the explorer’s trail, and having proved the falsity of the report of his death, returned to England within seven months of his departure without the loss of a single life.
After the actual death of the explorer the Scottish Universities determined to erect a permanent memorial to his memory, and it was decided to this end that a settlement should be planned on Lake Nyassa. To Young was entrusted the leadership and command, and splendidly did he perform his task. A large vessel, to be propelled by steam, was designed (like its predecessor, made in sections), and with this and a large party, and all the necessary and extensive paraphernalia for the erection of dwellings, planting of crops, etc., the party started. All these items, including the ship’s boiler, had to be transported on the shoulders of men from the cataracts on the Shire River up through 50 miles of forest to the lake, and it must be remembered that the loss of a single nut or screw would have meant disaster to the whole party. The work was safely accomplished, and the vessel was put together again on the lake, where she trades today. The Times in 1887, reported that at that time, some ten years subsequent the Ilala was tight as a bottle, while the settlement of Livingstonia then was sufficiently flourishing to support 13 publications issued in the native language and a large and successful town had grown up.
It was as a reward for his services that Mr. Young received the appointment at Dungeness, and now he has to retire. As it is, he will be pensioned as a warrant officer, which means his utter effacement, as the names of pensioned warrants are not retained in the Navy List after they pass from the Active List. Mr. Young has one failing, and that an uncommon and very serious one in these days of self-advertisement when men are taken by a simple public very much at their own appraisement. He is far too modest, and has allowed his really valuable services to be almost forgotten except by a few friends, who are now seeking to secure their proper recognition. There ought to be no difficulty whatever in conferring upon him the rank of lieutenant upon his retirement, so that the few years left to him may be spent in that modern comfort which such advancement would bring with it. Had he sprung from another class there would, I venture to say, have been any reason to remind the authorities of their duty."

Young’s experiences with capturing slavers affected him deeply and his abhorrence of slavery played a major part in his association with firstly the Zambezi Expedition, his later search for Livingstone and the establishment of Livingstonia Mission in what is now Malawi.

Born in Alverstoke, Hampshire in 1831, he was educated at Greenwich School and was a boy entrant into the Royal Navy. In 1852 he married Eliza Love Bartlett and had one daughter, also Eliza.

He spent several years on slavery patrols aboard HMS Gorgon off the east coast of Africa, often being in charge of one of the small boats put off to chase Arab dhows among the mosquito-infested rivers. Promoted to Gunner in June 1858 he was selected and seconded for duty on the Expedition’s steamers early in 1862.

Young seems to have been the only individual to have successfully negotiated the bickering, vitriol and accusations thrown around by both David and Charles Livingstone that plagued the Expedition and he stayed with it until its recall in 1864.

When David Livingstone went missing soon after the failure of the Expedition, and was presumed dead, Young was the ideal choice to lead a search for his former leader. He had personal knowledge of the man who gave out the information that Livingstone was dead and had learned not to trust him. And so the "Search for Livingstone" began. (Not to be confused with the more famous search some years later led by Henry Morton Stanley which resulted in the famous ‘Doctor Livingstone, I presume?’ quote.)

Publications by Edward Young were well-known during the era when Livingstone was much lauded. His diary about the adventure in searching for Livingstone can be read online here. There is also the occasional reprint of other works such as this one.

In 1875, Young was recruited out of his post with the coastguard at Dungeness and put in charge of taking the specially-constructed vessel Ilala to found the new mission at Livingstonia. That he succeeded eminently in this without major tragedies, racial strife or personality conflicts, reflects on his capabilities.

(For those readers with access to JSTOR Archives via their institution or library, there is a detailed article on his life by F.M. Withers in the Nyasaland Journal of January, 1951.)

A formal portrait of Young has been impossible to find, but there is a chance he could be the man on the left with what looks like naval attire. (Image from Livingstone: Man of Africa, Memorial Essays.)

Young was also one of the pall-bearers when David Livingstone was finally laid to rest in Westminster Abbey in April, 1874. Compared with the above photograph, he may well be the third man from the front.

Those who championed for Young’s promotion must have succeeded as his probate states he died on 4 November 1896 at Hastings as a “retired Lieutenant in Her Majesty’s Royal Navy”.

His only daughter Eliza never married and thus he has no descendants. Eliza was still living in the family home at 7 High Wickham, Hastings when she died in 1936. Seems there are blue plaques for other notable residents of this street, but the admirable Lieutenant E. D. Young, RN, is not one of them.


*  The vessel was appropriately named Search, had been built to Young’s design in the Admiralty Dockyards at Chatham. She was thirty feet long, eight in beam and drew eighteen inches of water; was fitted with cutter rigged sails and oars; and was specially constructed in steel sections, so that she could be easily dismantled and carried by porters overland past the cataracts on the Shire.  This image also from London Illustrated News, 4 October 1867 and presumably it is Young in the stern of Search waving farewell as he sets off to find Livingstone. 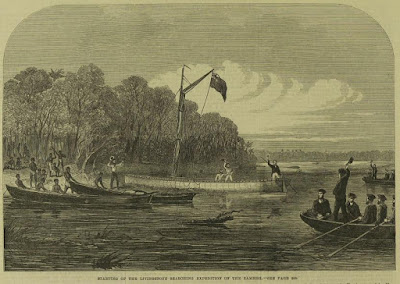 Posted by Regina of Arbeia at 3:02 PM