Beware of imitations! Either cure-all or killer

Chlorodyne was another product still given to children during the 1950s, usually for stomach upsets. Just a couple of drops in water were enough to do the trick. I still remember its pungent smell and taste and the general feeling of comfortable drowsiness it gave me. I have to wonder if my parents were ever really aware of how dangerous it was or whether they even bothered to keep it under lock and key.

Although there were many other imitators and the ingredients seem to vary somewhat depending on the sources, just the words alone seem astonishing today - opium (or morphia), chloroform, cannabis, prussic acid, belladonna, and something more often associated with explosives, nitroglycerin. 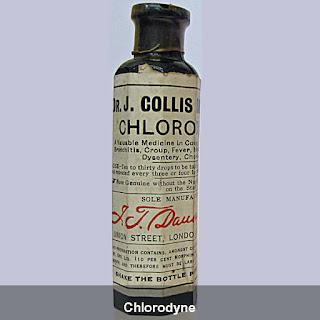 John Collis Browne was born in 1819 in Maidstone, Kent and after gaining medical qualifications in London joined the Army Medical Service as an assistant surgeon. He served with the 98th Regiment of Foot in China and later in various outposts in India and was one of the first regimental surgeons to serve on the North-West Frontier.

In 1848, Browne created his compound as a treatment for cholera, a disease that had carried off countless thousands of British men, women and children in the sub-continent. Its effectiveness was soon recognised. He later served in the Cape Colony before returning to England where he was asked to travel to the village of Trimdon in County Durham where there had been an outbreak of cholera.  So successful was his treatment that the villagers presented him with a gold medal in appreciation and the General Board of Health officially approved the mixture as a major treatment for cholera.

Leaving the army in 1856, Browne went into partnership with a chemist, John T. Davenport, whose firm would continue to manufacture chlorodyne for another 130 years. It became a must-have in the medical cabinets of millions of people and was used for all manner of ailments.

Other than his invention which made him very wealthy, Browne had diverse interests. He took out patents for improvements in storing explosives in ships and apparatus for raising wrecks and spent his retirement in Ramsgate messing about with boats, including the schooner Kala Fish.

Dr Collis Browne died in 1884 of hepatitis and he is buried in the churchyard of St Laurence, Ramsgate, Kent. His former home, Albion House, is now an hotel.

For all the lives that may have been saved by the invention of chlorodyne, it cast a very dark shadow as well.

On researching this topic through the newspaper archives, the number of intentional and unintentional deaths linked directly to chlorodyne soon proved far too numerous to include here in any detail. From some of the inquest accounts, apparently chlorodyne when mixed with other substances, especially alcohol, could not be easily traced in the less-scientific autopsy methods of the past so the results were often inconclusive.

The earliest newspaper report of death by chlorodyne was in 1856 when a toddler found the landlady’s bottle and just drank the lot. There are many inquests into people who thought it was a cure after a night of heavy drinking. Because of its easy availability it was also a popular route for suicides.

This sad report from 1886 in the Hemel Hempstead Gazette is about three maiden sisters who had a major addiction that only came to light when one of them died. One wonders what happened to the other two. 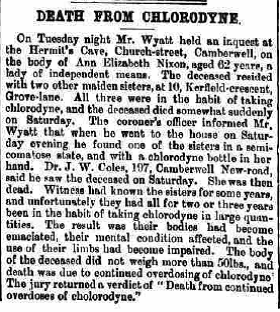 But how many cases went unreported? How many babies were accidentally killed by weary or depressed mothers who topped up their milk with just a few too many drops? And popping an overdose into an ill or aged relative’s nightly cup of cocoa would be a very convenient way of getting rid of them in order to claim an inheritance.

Then of course there are the famous cases, including the notorious baby-farmers and murderers Sach and Waters who used the substance to do away with the babies.  It was implicated in the Nottingham murder of Ada Baguley by Dorothy Waddingham and for several other British cases, see books written by Nicola Sly including Murder by Poison: A Casebook of Historic British Murders and Channel Island Murders. As the product was widely available throughout the Empire, who knows what other suspicious and uninvestigated deaths might be attributed to the use and/or abuse of the product.
A prominent politician from Western Australia, Sir Thomas Cockburn-Campbell died from it. This extract from his entry in the Australian Dictionary of Biography:

"He was found unconscious in the Legislative Council building on the evening of 27 September 1892, and died soon afterwards. The coroner found that he died from an overdose of chlorodyne taken to induce sleep, he well knowing the risk he was taking of its killing him."

The stuff even pops up in this medical article about the last days of Queen Victoria!

"... when requested at night to provide relief for the Queen’s insomnia, Sir James [Reid] gave chlorodyne, a vestigial version of the hypnotic chloral hydrate ..."

The following newspaper report from the New Zealand newspaper The Star of 5 February 1895 is just one example of the many incidents resulting in warnings in the press and it is interesting that the Colony of Victoria (Australia) had already restricted its use by that time, although it continued to be available freely around the world until comparatively recently. (Strangely enough, under the name of J. Collis Browne, the product still continues today as a remedy for both coughs and diarrhoea and still contains a form of morphine as well as peppermint. This appears to be available in pharmacies in the UK but nowhere else that I can see.) 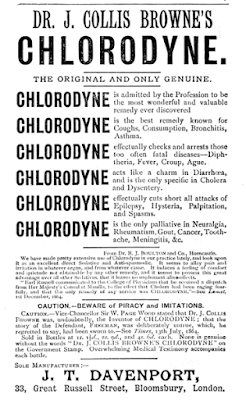 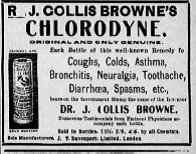 (* Biographical information taken from Oxford Dictionary of National Biography)
Posted by Regina of Arbeia at 2:02 PM