"Mutiny and Horrible Massacre at Sea" (2)

Finding out about the individuals involved in the tale of mutiny and massacre at sea from my previous post (read here) has had its challenges, not least in the various spelling of names.

Francis Cooke (or Cook) and his business ventures are mentioned in rather obscure works such as Commerce and Contraband on Mexico’s West Coast in the Era of Barron, Forbes and Co., 1821-1859 and Notes of Cases in the Ecclesiastical and Maritime Courts, Volume 6, but surprisingly, it is items from February 1849 editions of the Indian newspaper Friend of India that provide much more information about who Francis Cooke was, that his brother was Charles Northcote Cooke of the Bank of Bengal whose name appeared on Indian banknotes of the era and wrote books on banking.

The confirmation of Francis' death comes later in an obituary column:

October 3. Murdered, at Sea in the Pacific Ocean, on board the schooner Amelia, of Glasgow, on her passage to China, FRANCIS COOK, Esq., formerly of Great Prescot Street, London, but late of Mazatlan, new Mexico, North America, aged 44 years.

Francis’ wife was Sarah Selina Patterson, daughter of William and Sarah Patterson of No. 4 White Bear Court, Aldgate. She was born on  3 March 1804 and baptised on 1 April at St. Botolph, Aldgate, London. She married Francis Cooke on 19 May 1832 at All Hallows, London Wall. 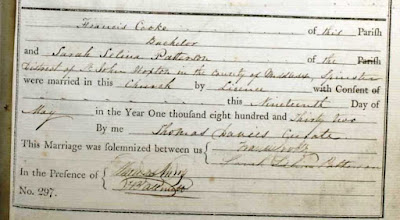 A daughter, Sarah Eliza, was born in December 1834, but died in May 1835. Another child, Francis Cobon, was born in January 1843 but sadly also did not survive and his death is recorded in the following year at the age of only 18 months. These losses add another tragic layer to all that Sarah Selina had to endure. If other children were born when they lived in Mexico and who may have survived, the records are not easy to trace.

Nor can anything be found from the tantalising snippet in the Friend of India article that states Mrs Cooke was forced to witness an earlier mutiny at sea and was detained in Rio de Janeiro for two to three months giving evidence.

Sarah Selina is missing from all the English Census Returns, perhaps because of living abroad or there are errors in her name, but she died in London on 13 July 1869, her last address being 45 Gloucester Street Belgrave Road and she is buried at Norwood Cemetery, Lambeth, London. Her effects were less than £800 in her Probate.

The next post will see what can be found about some of the other individuals involved.

Posted by Regina of Arbeia at 4:06 PM