There is a fascinating connection between a famous lion doorknob in Belfast, Northern Ireland, and one of those men who died during the Anglo-Boer War and now lies far from his native land in a quiet corner of Paradise.

(My initial blog post about this Boer War cemetery in Zimbabwe can be read here.)

The grave of Captain H.C.W. Hamilton of the 3rd (Queensland) Mounted Infantry Contingent * is the subject of quite a bit of confusion according to the ZimFieldGuide due to various authorities being involved in the reporting of the deaths and markers being made with errors. One cannot even be sure H.C.W. is where the cross says he is.

Also, on the cross the date of his death is out by a year and in fact he died on 12 July 1900. This also means that H.C.W. died for “Queen and Empire” not “King and Empire”, as King Edward VII did not ascend the throne until 22 January 1901 when Queen Victoria died.

It does not help either that H.C.W. accompanied the force but was never an official member of the 3rd Queensland Contingent and therefore does not appear in many of the usual Australian Boer War records. Naturally, this begs the question, why?

The first record connecting H.C.W. Hamilton to Australia is a passenger list for the Duke of Buckingham, a ship carrying assisted immigrants that sailed from London on 4 November 1885 and arrived in Brisbane on 4 January 1886. He travelled Second Class, no occupation mentioned, aged 30. Thus one might assume a birth year of about 1856.

With no matching birth records for him in England, the next clue was found in a Brisbane Telegraph newspaper report of his death dated 16 July 1900 which mentions the North Irish militia and from which it also appears he had been much younger than stated on the passenger list.

Thus a birth in Ireland looked likely, also that he had some status; enough to warrant several paragraphs in a colonial newspaper. **

There are a number of references in the Queensland Government Gazettes 1890-1896 to H.C.W.’s various promotions through the ranks in the Queensland Defence Force (Permanent Force) including his appointment as a Justice of the Peace. But H.C.W. resigned his commission in 1896 and it is not known what he did between then and accompanying the 3rd Contingent to the Boer War.

It turns out that Hugh Cecil Waldegrave Hamilton ^ was born on 17 November 1864 in Rathmines, Dublin, which would have made him just 22 when he arrived in Australia.

He had an aristocratic pedigree with links via his mother (Mary Warren) to the Baronetage of Borlase Warren that included a number of prominent individuals who had served in the Royal Navy, as Members of Parliament and Sheriffs of Nottingham. +

H.C.W.’s father was The Reverend Thomas Robert Hamilton, with many churchmen in his lineage and a descendant of an aristocratic Scottish family sent to Ulster in the early 17th Century by King James I. The Reverend, said to be an excitable individual with fierce opinions, including a hatred of Catholics, had been a chaplain in the Royal Navy during the Crimean War and later a curate at Holy Trinity Church in Rome and ultimately the Rector of St. Mark's, Dundela, Belfast.

Thomas and Mary had four children, two girls and two boys, but it was the younger sister of H.C.W., Florence (Flora) Augusta Hamilton (1862-1908) who left her mark in surprising ways. #

Flora went to Queen's University in Belfast (then Royal University of Ireland) from which she graduated with 1st Class Honours and a degree in Mathematics. It was very unusual for a woman to go to university and study such subjects at that time. She later went on to to marry Albert James Lewis and one of her sons was Clive Staples Lewis, best known to the world as the famous author of the Chronicles of Narnia , C.S. Lewis.  C.S. was only about 2 years old when his uncle H.C.W. died.

Some insight into H.C.W. and his family can be gleaned from this extract from C.S. Lewis: An Examined Life edited by Bruce L. Edwards: %

...According to Sayer [another biographer] Thomas and Mary were failures as parents - neither knowing how to make their children happy nor how to raise them without giving any of them preferential treatment. This they often did to Cecil [H.C.W.] and Lilian. Also, Gussie [the other son] was so disliked by his father that he refused to help him pay for his education as he helped the other children. And even though he eventually made good for himself, Gussie, in response, became completely self-centered and unkind to others, even to his mother and to his close friends. Hooper [another biographer] also notes that Cecil, after finishing his education and failing to obtain a commission in the Royal Army, emigrated to Australia - where he worked and served in their army, eventually dying in South Africa in 1900. Even Flora, with her great education at Queen’s University, Belfast, completed in 1886, as far as is known, failed to do anything with it, merely functioning as another servant for her mother. It would still be another eight years before she married Lewis’s father, Albert. Green and Hooper, among many other biographers, have noted how Thomas Hamilton misused Albert’s romantic interest in Flora for his own benefit, expecting Albert to travel with or make preparations for him, serving his hoped to be future father in law much as Jacob served Laban for Rachel.

o add to this, there is this extract from a letter mentioned in the ZimFieldGuide and written by one of the commanding officers at Marandellas to his fiancee in Australia, dated 10 July 1900, and a picture begins to emerge of Cecil:

“ ... Captain Hamilton under my care who has gone to the dogs with drinking and morphine. No orderly would stay with him and I was afraid he would commit suicide. I had a bad time. I managed to get him into the hospital, so that was a relief.”


“Captain Hamilton, I regret to say, died yesterday and was buried close to the camp.”

Did Cecil disappoint his parents or even disgrace them in some way and was thus packed off at the age of 22 to the colonies, a typical “remittance man”? Or did he leave of his volition simply to get away from family dysfunction or impossible expectations and find his own way in life? A not uncommon scenario in high achiever families, both then and now.

Although with his former career in the Queensland military, it is surprising he wasn't an automatic choice to be taken into the 3rd Queensland Contingent to Africa. Did he have addiction problems that would have been known to the recruiting authorities and this would explain his decision to travel with them as unattached? The references to alcohol, drugs and potential suicide carry all the signs of a man who may have not been suffering just from illness but who could have also been deeply troubled for other reasons.

No images of Cecil can be found, but perhaps he had some similarities to his sister, Flora.

And so to the doorknob mentioned at the start.

Perhaps that door of the rectory was intentionally banged shut by H.C.W. in 1885, who was never to return. Was he considered a black sheep? Did C.S. Lewis ever know the real reasons his uncle went off to Australia and how he died “of dysentery” in Africa? (If any student of the life and works of C.S. Lewis has any information to add in this connection, I would love to hear from you.)

A little ironic that H.C.W. was laid to rest in soil over which real lions would once have roamed.

YouTube Video showing the home of H.C.W. in Ireland.

* This contingent consisted of 320 mounted infantry and was commanded by Major W. H. Tunbridge. It sailed from Brisbane on 1 March 1900 on the Duke of Portland arriving at the Cape on 3 April and was then sent to Beira, Mozambique, where it arrived in the middle of April. The contingent became part of the Rhodesian Field Force and travelled the first 500 kilometres overland, first via railway to Marandellas and then using other modes of transport, in coaches and wagons and on foot, another 500 km to Bulawayo in the west of the country. Exposure to deadly diseases such as malaria and dysentery while in Portuguese East Africa was to play havoc with the health of the troops. 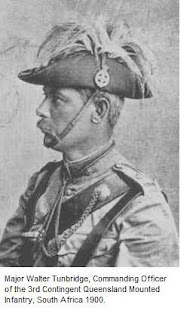 His Excellency the Governor this morning received a cablegram from the High Commissioner for South Africa (Sir Alfred Milner), announcing the death from dysentery of Captain H: C. W. Hamilton, of the Queensland Permanent Artillery.
Captain Hamilton joined A Battery of the Queensland Regiment of Royal Australian Artillery as a probationary lieutenant on May 14; 1890. He was promoted to be lieutenant on July 23, 1890. On February 25, 1895, he was promoted to the rank of captain. He resigned his appointment, and was placed on the unattached list, on November 18, 1896. Captain Hamilton went to South Africa with the third contingent, but not as a member. He was granted a free pass to South Africa, whither he went with a view of seeing active service. Captain Hamilton, at the time of his death was 35 years of age. He formerly belonged to the North Irish militia. The Defence Force authorities have received an official message from the officer commanding the lines at Marandellas, dated July 13, as follows: "Captain H. C. W. Hamilton, Queensland Mounted Infantry, died yesterday of dysentery at Marandellas." This seems to indicate that Captain Hamilton accompanied the Queensland third contingent as far as Marandellas, although he was not enrolled in Queensland as a member of the contingent.

^ With many thanks to a fellow member of Ancestry, V. Fawcett, for tracking down this information for me.

+ The family name lives on in a quite a different way with The Sir John Borlase Warren being a popular gastro pub in Nottingham, UK!

All posts in this series on Digging the Dust

Posted by Regina of Arbeia at 7:19 PM