A young lady and her book. (The Greys of Fallodon, Part I)


This little book, entitled Walks in a Forest, by Thomas Gisborne, M.A., and published by T. Cadell and W. Davies of Strand, London, in 1814, has been part of my family's book collection for many years.

I believe my father picked it up in an English second-hand bookshop, having spotted the bookplate that shows it once belonged in the library of the Greys of Fallodon, an aristocratic family with ties to his native county of Northumberland.

The tiny bookseller’s sticker in the top left hand corner showed that it was sold by T. Gibbons, Bookseller and Binder, of No. 5 Argyle Street, Bath. The building (No. 5 on the corner) still stands today, probably not too much different from how it was in 1817. 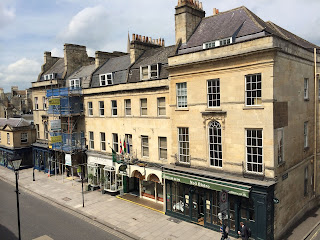 On another page in the book and in fading ink, the following is inscribed:

A search of this lady shows her to have been the eldest of the thirteen children of The Rt. Rev. Henry Dudley Ryder, Bishop of Lichfield, and she was born on 18 January 1805 at the Lutterworth Parsonage, Leicestershire. Thus, she would have been just twelve-and-a-half years old when her name was inscribed in the book.


Although one can never know how the young Anna came by the book, it is possible it was a gift or purchased during a visit to Bath in the season while visiting with members of her family. This was the height of the Regency era when Bath was the ton, or the place to be seen if you moved in the higher echelons of society.

Teenagers and pre-teens as we know them today with their own outspoken identities and cultures did not exist in those days. You were a child and then you were an adult, and the stage when you moved from one state to the other might be dependent on your physical maturity rather than a day on the calendar. (Anyone researching their family trees in the late 18th/early 19th Century knows the shocks that are in store as to the age some girls were married and/or gave birth or when boys became front-line soldiers.)

Being from a religious family it is debatable whether the young Anna, barely on the cusp of womanhood, would be permitted to attend the slightly risque gathering places of Regency Bath, but as she also had an aristocratic pedigree and several politicians in the family noted for their liberalism (and more than their fair share of illegitimate progeny among them), it is impossible to say. This extract about her father from the Oxford Dictionary of National Biography:-

... While participating fully in the fashionable social life expected of a clergyman of his means and connections, Ryder seems, from the beginning, to have taken his pastoral charge at Lutterworth and Claybrook with great seriousness. ... He was also attentive to the development of personal piety and to that of his family, whom he regularly assembled for the reading of prayers. His connections and his attention to his duty guaranteed further preferment, and in 1808 he was presented to a canonry of Windsor. His sermons in St George's Chapel were greatly admired by George III, who said that they reminded him of the divinity of former days ...


The romantic in me likes to imagine that young Miss Ryder may have strolled about looking at the sights of Bath with her mother or another chaperone, perhaps with this little book in her hand or with it carefully packaged and tucked in her reticule. Judging from the image below, one wonders if there might have been a trend to carry little poetry books around as a fashion accessory?

This image is dated August, 1817. Interesting that the book she is holding is the same size, with the same brown cover and rectangular emboss as my book and given the title of the image is also Walking Dress, it is very possibly a copy of Walks in a Forest.


The text in the book is extremely florid by modern standards and is littered with explanatory footnotes, some in Greek or Latin, and it takes a lot of patience to read, let alone comprehend. Although the cover is battered, the inner pages are almost pristine and the spine has never been broken. Perhaps young Anna also found it a little tedious and was more interested in the comings and goings of the fashionable set in Regency Bath.

Another observation, in this 1814 edition the text has been updated into modern usage and no longer has the long "S" which looks like an "f". Here is a link to the earlier edition at Internet Archive.

It is very likely Anna was familiar with Jane Austen, whose works are famously linked with her time in Bath, and no doubt would have been saddened when the author was to die so soon, in July 1817. Another notable departure that year was the tragic loss in childbirth of the heiress apparent, Princess Charlotte, as a result of which twenty years later her cousin, Princess Victoria, was destined to become Queen, under whom Anna’s future husband would serve in government.

On 14 August 1827, in Holy Trinity Church, Eccleshall, Staffordshire, Anna married The Hon. Sir George Grey, who was at the time a lawyer in private practice but who one year later succeeded to the baronetcy as the 2nd Earl Grey, and in 1832 entered Parliament initially as the Whig member for Devonport and in later years as the member for Morpeth. He would serve under four Prime Ministers, often as Home Secretary, and played an important role in many of the major reforms during the Victorian era.

In spite of the strong moral principles of his father, George Henry seems to have followed in the footsteps of his other rakish relatives (and his boss, the Prince of Wales, for that matter!) as, according to an online family tree, he had two illegitimate children as well as seven legitimate ones.  George Henry died quite young, in December 1874, at Sandringham and the Prince of Wales attended his funeral service in Northumberland.

It must have been a terrible blow for Anna and George to lose their only son, but they went on to play important roles in raising their grandchildren, one of whom would become the more famous Edward Grey, 1st Viscount of Fallodon.

This report is from the Yorkshire Post and Leeds Intelligencer of 18 December, 1874:-

FUNERAL OF LIEUT.-COLONEL GREY.The remains of Lieut.-Colonel George Henry Grey, only son of the Right Hon. Sir George Grey, Bart., G.C.B, of Falloden, Northumberland, and one of the equerries of his Royal Highness the Prince of Wales, were interred shortly before noon yesterday, in the family vault, in the small churchyard of Embleton, situated about two miles from Falloden. The Prince of Wales was present, having arrived in the North on the preceding evening, and become the guest during his short stay of Earl Grey, at Howick Hall, which is only short distance from Falloden.The deceased gentleman expired after short illness, at the Equerries' Lodge, Sandringham, whence his body was removed to the family seat. He caught a severe cold whilst on short visit to Falloden three weeks ago, but proceeded to Sandringham, where congestion of the lungs afterwards set in, and he died yesterday week, the immediate cause of death being inflammation of the pleuris. The funeral procession, which consisted of hearse and five mourning coaches, left Falloden at eleven o'clock, and, on its arrival, was joined by the Prince of Wales, Earl Grey, the Duke of Northumberland, Earl Percy, M.P., and a number of the neighbouring gentry. [Full list of attendees not included here].A large assemblage of the neighbouring agricultural population was in the vicinity of the churchyard and on the route, and they evinced every mark of respect for the memory of the deceased and at his untimely end. There were also present the permanent staff of the Northumberland Light Infantry Militia, of which the deceased gentleman was lieutenant-colonel. The burial service was read by the Rev. W. Streatfeild, rector of Howick. The Prince of Wales left in the afternoon express train for the south.

When he died in 1882, George had been married to Anna for 55 years, a record these days and even more remarkable then. Anna herself died in December 1893 just before her 89th birthday.

Unfortunately, I have been unable to find any images of Anna when she was alive, but here is the memorial to her and George in the Holy Trinity Churchyard, Embleton, Northumberland. Copyright Find-a-Grave. 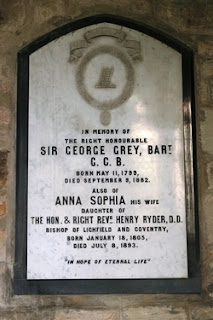 Fallodon Hall no longer belongs to the Grey family, but is occasionally open to the public under the Open Garden Scheme

Posted by Regina of Arbeia at 1:54 PM