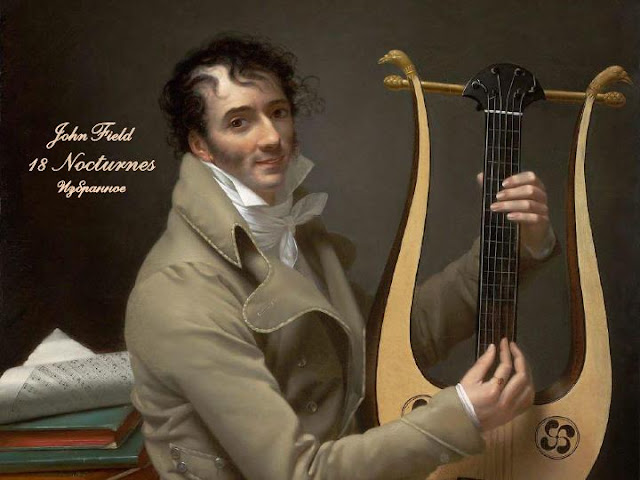 John Field is a name that may be unfamiliar to many music lovers, but he deserves to be rediscovered and played more widely. He is credited with being the inventor of the nocturne, although it is Frederic Chopin who is now most closely associated with the form.

I happened to first hear one of Field’s nocturnes on a classical broadcast some years ago and was instantly drawn to the music. When I discovered the composer was an Irishman who had his greatest success in early 19th Century Russia, it seemed to fit perfectly with what I was listening to; the lyrical echo of an Irish soul combined with that Russian love of melancholy romanticism.

Like Mozart, Field was a child prodigy. He was born in Dublin in 1782, the son of a theatrical violinist. He received his early musical education from his grandfather who was an organist, and later from Tommaso Giordani.

At the age of ten, John Field made his first public appearance in Dublin. The family then moved to England spending time between London and Bath. John served an apprenticeship with Muzio Clementi while working part time as a piano salesman.

While still a boy, he appeared at Covent Garden and other London theatres. He first performed his own piano concerto at the King’s Theatre in 1799 to mixed reviews, although one observer considered him to be “one of the finest performers in this kingdom”.

Even after he had served his apprenticeship, John remained somewhat subservient to Clementi and travelled with him throughout Europe. After the pair had been in St. Petersburg during 1803, Clementi left but Field stayed behind and through patronage of one General Marklovsky, he finally came into his own. His music became fashionable in the music salons and he was in demand as a private teacher. In 1806 he made his debut in Moscow. His entry in the ODB says:


During this time Field developed the genre that he eventually called the nocturne and for which he became renowned throughout Europe. The nocturne is a one-movement piece characterized by a dreamy atmosphere but with no specific programme, fulfilling the Romantic belief that music can express emotions inexpressible by words.


There is an echo here of the future Franz Lizst in John Field at this time; adored by the ladies, dodging his way in and out of romantic escapades. His biographer offers us this description that with the dominating Clementi out of the way he emerges into the light as:

“…an amusingly absent-minded and thoroughly hedonistic Bohemian; often feckless, but full of charm, and always surrounded by a circle of admirers who felt for him something very like hero worship …”


He dressed well and had a fashionable address, with his own carriage, attended all the parties, smoked Havana cigars, imbibed too much champagne and indulged in frivolities and gossip. He was overly generous with money, spending it as soon as he earned it.

Field’s enjoyment of the social life conflicted with his composing. Like many a genius, he could be erratic, lazy and even undisciplined at times and then overcome with the urgent compulsion to create. A friend later recalled that he would always need one glass of alcohol to get him started, then he would abstain but write music in a frenzy all night and throw the sheets all over the room, to be collected by others to put into order. He’d then collapse at three or four in the morning, only to be revived later with endless cups of coffee. After a bout of creation, he could be in a dishevelled and low mood when people would be forced to tiptoe around and not disturb him.


In 1810, Field married Adelaide Victoria Percheron, born in Pondicherry, India, and daughter of the war commissioner of the French fleet. She was one of his Moscow pupils and had been his mistress since 1807. The marriage was not a success, she was flightly and both of them tended to excesses, idleness and were hopeless with money, and Field really needed a more restrained woman to counterbalance his temperament. They had a son, Adrien, in 1819, before separating. Adrien also became a pianist but alcoholism cut short his career.


In 1812, Field had been able to escape from Napoleon’s Grand Armee as it approached Moscow by rushing back to St Petersburg, but in 1821 returned to live in Moscow.

As a composer, Field often struggled with his alcoholism and ill health (cancer) as well as his erratic tendencies, so his repertoire is not as great as it might have been. After a trip to England in 1832 with his son Leon, where he gave concerts, had a last reunion with his mother and also sought out medical attention, he returned to Russia via various European cities, but his declining health meant his performances were not particularly successful and this heralded his future descent into obscurity.

John Field died in Moscow in 1837 and is buried in the Vedensky Cemetery.

Field’s style of piano music has been overshadowed by his more famous successors such as Liszt and Chopin. This is what one of his students, the “father of Russian classical music”, Mikhail Glinka had to say of him:


I clearly remember his energetic and at the same time sophisticated and precise performance. It seemed to me that he did not even press the keys, his fingers simply fell on them like raindrops, glided like pearls on velvet. Neither I nor any true admirer of musical art can agree with Liszt, who once said that Field played sluggishly. Not. Field’s play has always been bold, erratic and diverse; he never mutilated art like a charlatan, as very popular pianists often do.

Many musicians have recorded John Field, but in my opinion the best interpretation is that by his fellow countryman, John O’Conor, who somehow captures that unique Irish/Russian essence the best.

Posted by Regina of Arbeia at 7:05 PM