The Ironbark Brig from Manning River


This small advertisement appeared in a number of Liverpool, UK, newspapers in August of 1845.

Length 75 feet, breadth 19 feet 6-10ths, depth 12 feet, 143 tons.
This beautiful vessel was built in New South Wales, framed throughout with iron bark, planked with flooded gum, each equal in durability to East India teak; coppered and copper fastened; her sailing qualities are first rate, her passage from Sydney 108 days; shifts without ballast, and is of an easy draft of water.

For further particulars apply on board, in the Union Dock; to
T. R. Robins, Hatton-garden, or to
D. TONGE, Broker, 7, Castle Street.

I first encountered a reference to this ship when visiting the Swansea Maritime Museum in Wales some years ago, where its name appeared in a list of local well-known 19th Century vessels in which many Swansea men had crewed.

With time limited, I was unable to investigate further at the museum but was intrigued as to its origins as I had previously researched the life and times of Benjamin Boyd, an enterprising scallywag who became infamous in Colonial Australia and who had fascinated me so much that I made him the subject of my first novel. *

Naturally, I had wondered if the vessel was somehow connected to him but with Boyd being a Scot, and with no known connections to Wales, I assumed it was just a coincidental name.

I remembered that visit to the museum when recently I stumbled on another reference to this vessel and with much more information now available via old newspapers on the Internet I decided to see if I could find out more about it.

The “Triton” was the first brig of three built by master boat-builder John Nicholson in 1844 on the Manning River, New South Wales, where the town of Taree now stands.

Briefly owned by early Colonial mariner, Captain George Browning (a remarkable character whose own hair-raising story of being kidnapped by escaped convicts is worthy of another novel), it was then bought in Sydney by a Captain Tomkins, who changed the name of the brig from “Triton” to “Benjamin Boyd”, after the prominent entrepreneur then at the height of his power and influence in New South Wales.


Tomkins sailed the small brig to England with a cargo of wool and other goods, but with an economic depression taking hold in the Colony (destined to be the ruin of Boyd) and perhaps debts owing or due on Tomkins' own account, the vessel never returned to Sydney and was put up for sale.

Apparently it was then re-registered with Bristol as its home port and with registration No. 7803, beginning a long and busy career sailing back and forth around the British Isles, Europe and West Africa with various cargoes including timber and coal and it spent many years bringing imports of wine and spirits from Spain and Portugal to England.

It was inevitable that the vessel would suffer wear and tear and several mishaps as a result of storms and the following sad report appeared in a Norwich newspaper in 1868 when its then master and part-owner, Samuel Nicholas, suffered such depression that he jumped overboard.

But the vessel must have been rescued and repaired as she appeared again for sale in Bristol and passed into new hands periodically during every decade that followed, with various owners in Glamorgan, Belfast, Wexford and Somerset.

Sturdy and reliable, the little two-masted ironbark brig “Benjamin Boyd” criss-crossed the seas a remarkable 62 years from when she was built!

Her end came on 27 November 1906 when she collided off Penarth with a tramp steamer and her owner and master at the time was Thomas Chidgey, who was a well-known marine artist. ** 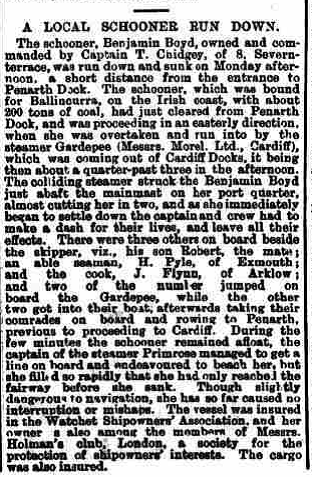 It seems the steamer  “Gardepee” ^ was in the wrong, but fortunately Captain Chidgey, his son Robert who was the Mate, and the other crew all escaped. The cargo and “Benjamin Boyd” was fully insured. Being of sound and reliable construction, throughout her career she was always listed as A1 at Lloyds.

The vessel would have employed generations of sailors during that time, many of them possibly from the same families. The Swansea Mariners project provides some of these names, including, to my surprise, a Captain Jewell/Jewill from Clovelly, possibly a distant ancestor of my late husband who is descended from Jewells in that area.

It also may be that another of my husband’s ancestors, another seafarer, John Darch, was familiar with the comings and goings of the vessel having been a both a member of the Welsh Coastguard and a gateman on the dock gates at West Bute Dock at the time when the sturdy little ironbark brig from New South Wales finally ended her days, being salvaged and put up for auction. 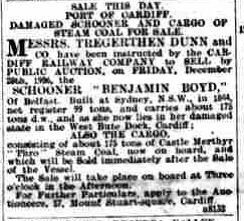 One has to wonder where all that ironbark and flooded gum wood went after the vessel was stripped.

Perhaps some was used to repair other vessels, perhaps it went into building timber, floors or even pieces of furniture. It could be that Australian timber pieces from the  “Benjamin Boyd” still exist somewhere.

But what a fine testament to the quality of the workmanship and skills of John Nicholson who built her so long ago on the banks of what was then a remote Australian river. #

* "Time and a Legend" is currently out of print.

** Chidgey was born in 1855, eleven years after the “Benjamin Boyd” first started her career. There are a handful of his paintings to be seen online, but he is supposed to have painted hundreds and surely somewhere there is one of the “Benjamin Boyd”.

^  She was eventually sunk by a U-boat during World War I with the loss of most of her crew.

(Apparently at this Swansea hotel you can stay in bedrooms named after well-known local ships, one of them being the “Benjamin Boyd”!)