The Kings of Photography (2)

Without any in-depth biographies on William and Daniel Downey, any research into their private lives has to rely mainly on what is accessible via family history resources.

It’s well known that during the Victorian age, an individual’s public face was often quite different from the private one and what went on behind the scenes was often covered up if there was a risk of shame or disgrace that resulted in being ostracised by society or ruined financially. Queen Victoria was the symbol of strict morality and family values and she would not look kindly on any divorced person in her presence, nor was she particularly sympathetic towards those who suffered from mental disorders.

So, not expecting to find much more than is usual in the Census Returns or the occasional archival newspaper report,  it was therefore a surprise to discover some references that point to a more intriguing background to the Downey brothers which, given their positions close to royalty, could have damaged their successful business had this information reached the ears of their clients, especially the Queen.

There is no way to avoid the fact but Daniel Downey died in a madhouse - albeit a discreet one tucked away in the East of London and which catered to people who could afford the fees - in this case, Bethnal House at Bethnal Green.

The paragraph on Daniel in the now-defunct photolondon website states he died of an epileptic convulsion on 15 July 1881. Without seeing the actual death certificate, it is presumed this is true, as Bethnal House is shown as his address in the National Probate Calendar and also appears in this Chancery Division notice from the London Evening Standard  of 6 December 1881. 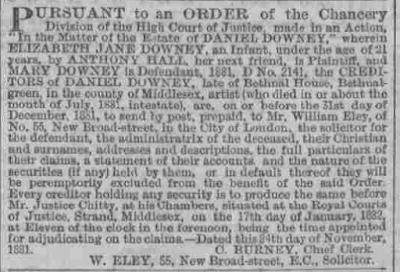 This notice raises further questions. The Plaintiff, Elizabeth Jane Downey (b. 1867) was one of Daniel’s children by his first marriage to Elizabeth Smith Beloe who had died in 1873. Daniel left no Will and Administration of his estate was granted to the Defendant, his second wife, Mary Stratford, whom he had married in 1876 and with whom he had a further two children.

Daniel left nearly £4,500 (around £400,000 today) and undoubtedly there would have been a tussle to make sure his earlier family received their fair share. Nothing further appears in the newspapers, so it is presumed there was a settlement, although Mary Downey was to be the subject of a future legal matter.

(As to Daniel’s epilepsy, it is not known how long he suffered from it but it is highly possible that this could have been caused by his exposure for so many years to the dangerous chemicals, including mercury, used in early photographic processes.)

On 24 August 1892, Lucy Ellen, second wife of William Downey and about 20 years younger than him, filed for divorce, citing Mary Downey. The third paragraph of the petition states:

That from March 1891 until 14th August 1892, the said William Downey has frequently committed incestuous adultery with Mrs Mary Downey, his deceased brother’s wife at 10 Nevern Square and at Shoreham in the County of Sussex.

The divorce didn’t go through and was dismissed in February 1893. It is interesting to speculate on what might have happened. William certainly was staying at Mary’s house in Shoreham in the 1891 Census along with other family members so there might be substance to the allegations.

But a divorce would have been utterly disastrous for William’s good standing with Queen Victoria, so was Lucy persuaded or forced to drop the petition for the good of all involved? Surely she wouldn’t have taken such a drastic step without solid proof?

The subsequent Census Returns show them together again. Did Lucy forgive her husband or did she stay on in sufferance? Being a divorced woman in that era would have been disastrous for her and more than likely she had no option but to put up and shut up. Given William’s close connection to some of the most glamorous and beautiful women of the age, princesses and actresses, if he did have a roving eye, there is no knowing how many flirtations or affairs he might have had over the years.

His earlier life throws up a possibility of another disgruntled wife. Back in 1871, William’s first wife Caroline - who was about 10 years older than him - lived on her own at the 9 Eldon Square, Newcastle, premises of W. & D. Downey. She is shown in the Census as “wife of a dentist”. Why is she described so? Did the Census-taker mishear? Or was it deliberate, a private joke? Was Caroline being modest to avoid questions or did she not want to associate herself with her husband’s fame and business any longer?

It happens that in the same 1871 Census, William can be found at the Ebury Street address in London where he had his studio, and with him are two unmarried women with the surname of Walton, both described as “dressmakers” from Ireland.

While one should never leap to conclusions from a Census Return in an era where the term “dressmaker” often had loose connotations, there is no doubt a married man in his forties with a 16 year old maidservant and two women in their twenties sleeping under the same roof does raise the eyebrows just a little. Curiously enough, on that same night another Walton woman (Letitia) is an Irish visitor at Daniel Downey’s house in Windsor.


Subsequent research shows that Letitia Walton and her daughters/sisters ran either a dressmaking or millinery shop in Ebury Street for many years and were probably genuine providers of apparel to the upper classes or possibly the theatre. Perhaps the Downey brothers helped the Walton dressmaking business to get a start, but why or under what circumstances is impossible to know without some serious archival research.

When William Downey died in 1915, he left a massive fortune of £207,000, the equivalent of about 10 million pounds today. No family members are shown as Executors in the Probate and finding out the beneficiaries would require access to documents beyond the scope of this blog, but when Lucy Ellen Downey died in 1924 she had an estate valued at £1,419 (modern value £50,000) left to her son and daughter.

Then, surprisingly, another Probate for Lucy is listed for a year later, this time for £8,500 (or £300,000 today) with two different women named as administrators, neither of whom appears to be a family member. Another tangled web that points to possibly some confusion on the whereabouts of assets in Lucy’s estate and other claimants to her money.

It makes one wonder what other curious matters are to be found hidden away in the Downey family history.

Some more Downey photographs of the beautiful and powerful on this Pinterest page.

Posted by Regina of Arbeia at 4:53 PM