When strolling through an English park recently, I stumbled on an interesting and perhaps little-known link between a lost manor house in Tunbridge Wells and a historic place in Victoria, Australia - a place that I have driven past many times without giving it a second thought.

Many mid-19th Century emigrants from Britain and elsewhere would have first set foot on the Australian continent at Point Henry which is on Corio Bay, an arm of Port Phillip Bay.

At the time, access to the main settlement at Geelong was difficult due to a sand bar that restricted many ships entering the port and most of the larger vessels had no choice but to offload their passengers and cargoes at Point Henry. In later years, channels were cut in the sandbar which enabled Geelong to develop into a major port.

Once ashore, the new arrivals would have had to get themselves to Geelong by whatever means they could. If they had money, they would have been able to hire smaller boats to ferry them across the bay, or horses and carts or wagons to haul them overland with their belongings. If they were poor people, they would have had no option but to walk, carrying whatever they could, trudging through six miles of scrubby bush bordered in places by salty or marshy ground.

How the Point got its name has been debated, although a timeline available from the Bellarine Historical Society notes that in September 1836, Lieut. H R Henry of the survey vessel HMS Rattlesnake allegedly named it after himself, but “… the brig which was in the area 3 months earlier is considered the more credible source.” This vessel was the Henry, owned by a man called Henry Reed.

The Geelong Historical Society erected this plaque in 1951 at Point Henry. 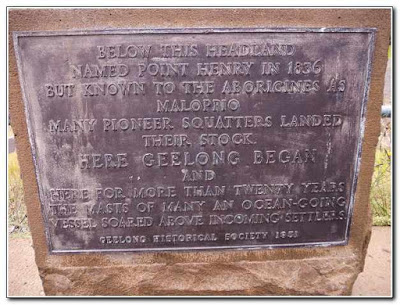 BELOW THIS HEADLAND
NAMED POINT HENRY IN 1836
BUT KNOWN TO THE ABORIGINES AS
MALOPPIO
MANY PIONEER SQUATTERS LANDED
THEIR STOCK.
HERE GEELONG BEGAN
AND
HERE FOR MORE THAN TWENTY YEARS,
THE MASTS OF MANY AN OCEAN-GOING
VESSEL SOARED ABOVE INCOMING SETTLERS.

Henry Reed (1806-1880) was a canny and dynamic, yet profoundly religious, Yorkshire businessman and philanthropist who became influential in many areas of trade and settlement in the early years of colonial Australia.

Henry was the son of a Doncaster postmaster who died when he was just five years old. This left the family in dire straits and Henry's mother took in washing to support the family and to pay for the children's elementary education. At thirteen, Henry became a merchant’s apprentice and at the age of twenty was given a letter of introduction to a trader in Van Diemen’s Land (Tasmania). After arriving in Hobart in 1827, he walked all the way across the island to Launceston, a distance of some 120 miles.

While working in a store in Launceston, he made friends with one John Batman and was a witness at his marriage. He would later give Batman a loan to help with his enterprise in establishing the future city of Melbourne.

Henry went into business for himself as a general merchant and then moved into shipping, sealing and whaling, banking, and was even briefly a politician. The Henry was one of the first vessels he owned. He established a whaling station at Portland Bay, and often commanded his own ships on their voyages, with the Henry investigating the viability of harbours in South Australia which would help with the establishment of that colony as well.

Henry’s strong religious principles remained at the forefront of his activities: *

"With all his business ventures Reed found time for practical religion. By faith a Wesleyan and a fervent evangelist, he had ready sympathy for all unfortunates. At Port Phillip he spent some time up country with Aboriginals in hope of saving them from a fate like that of the Tasmanian tribes. He was reputed to have preached the first sermon on the site of Melbourne, his congregation being Henry and John Batman, William Buckley, and three Sydney Aboriginals. To encourage the opening of a mission at the new settlement he offered £20 and annual subscriptions. At Launceston in November 1837 he had himself locked one night in the cells with condemned criminals who were to be executed next morning."

Even on his return to England in 1847, where he lived for the next 26 years, he continued to be deeply involved in philanthropic causes:-

"... He became associated with General Booth and helped him with money and advice in the difficult formative years of the Salvation Army. Generous gifts were also made to other evangelical work such as the China Inland Mission and the East London Christian Mission. He helped to establish places of worship in the East End and schools on Bow Common …


… he undertook many preaching engagements throughout the north of England and, dismayed by the widespread poverty he encountered, devoted himself to providing homes and assisting the poor with food and other necessities. In his native Doncaster he bought ten cottages for free occupation by aged Christians and arranged to pay all the rates and repair bills."

Another of his passions was building, including warehouses for his businesses and houses for his ever-increasing family. (Henry married twice and had at least sixteen children.)

Macquarie House was one of Launceston's earliest buildings that still stands today. Read about it here.

Another of his earlier houses built in 1859 also still stands today at Queenscliffe, on the Bellarine Peninsula near to where ships passed through the Heads of Port Phillip Bay on their way to Point Henry. Generations of Port Phillip pilots have called this modest six-roomed house home.

On his return to England, Henry built a number of imposing houses for his family, including Dunorlan Harrogate but it was at another Dunorlan at Royal Tunbridge Wells, where he would create the most lavish and grandest of them all. Its keystone displayed his family crest, a wheatsheaf with the motto “Nothing Without the Cross”.

This new Dunorlan would have everything that any self-made Victorian entrepreneur should aspire to: a collection of rare or exotic trees, stretches of open meadows and a series of terraces that led down to a private lake complete with cascade created out of that peculiarly unique Victorian invention, pulhamite rock.

Grecian statues lined an avenue planted with cedars that led from a fountain to a folly in the style of a Grecian temple. The estate even had a spring to rival the famous Chalybeate Spring in The Pantiles of Tunbridge Wells.

However, in spite of the huge amount of time and money invested in Dunorlan, Henry was dissatisfied and did not live there for long. (There are suggestions that conflicts with local Christians over the message such opulence was sending to the local community might have had something to do with it.)

Less than 10 years after its completion, Dunorlan was put up for sale. The house was bought by a Canadian banking family but eventually it was requisitioned in 1941 as part of the War effort. Apparently soldiers who were billeted there used the statues along the cedar avenue for target practice and left nothing but a few pedestals. In 1946, the building caught fire and although efforts were made to restore it, the local authorities had it demolished in 1957. New houses were built in its place and the rest of Dunorlan Park was given to the public for everyone to enjoy.

In 1873, Henry Reed had returned to Tasmania where he continued to combine his evangelism with creating more grand homes for his family. The estate of Mount Pleasant near Launceston and Mountain Villa on Wesley Dale. Mount Pleasant was said to be the finest house in Northern Tasmania.

Henry did not slow down, however. In 1875 he helped in the establishment of the New Guinea Mission, buying for it a steam launch named the Henry Reed. He bought and demolished a hotel and a skittle alley in Launceston and built a new chapel on the site. This would later become the Henry Reed Memorial Church, now the Baptist Gateway Church.

Shortly before his death in 1880, Henry wrote to a friend:

'I have been so much accustomed to put my whole heart into anything I have engaged in, and to do it in the best possible way, and never to be satisfied with anything but decided success whether in spiritual or temporal things, that it troubles me much when I see things half done or carelessly done, but I must ask the Lord to help me in old age to look over and pass by many things.'

As for Point Henry, it has long been an ugly blot on the landscape, being the site of the Alcoa Aluminium smelter, which is now closed and there are long-term plans for the whole area of Point Henry to be redeveloped and rehabilitated with new housing and tourist attractions. Churches are unlikely to feature in our secular age, but perhaps Henry Reed would approve of the energy and vision it will require to take to bring to fruition.

* Extracts from entry for Henry Reed in the ADB
Posted by Regina of Arbeia at 6:24 PM