"Learn it, but never play the retreat". A teenage hero of the Boer War

On 2 February 1950, an elderly man died at the Waverley War Memorial Hospital in Sydney, Australia. The relevant newspaper funeral notices described him as a “Boer War veteran” but nothing else. There was no mention of his wife although apparently he was survived by three children - Nora, Eileen and John - and some relatives connected with Fiji. To the uninitiated, the life of John Francis Dunne was just another routine passing.

What may not have been known about him is that when he was in his mid-teens he was a world-wide celebrity, almost a cult figure. At the age of 15, he had met Queen Victoria and his image appeared in newspapers, magazines, in comics and children’s books, on pennants, badges, buttons and cigarette cards and all other types of memorabilia. He toured and appeared on stage in re-enactments, including a play called During the Siege in which he had the role of a dispatch carrier. There was a music hall ditty written about him and his image was reproduced in commemorative decorative figurines.

Dunne had been born on the Isle of Man on 22 January, 1884, the son of a soldier in the Royal Dublin Fusiliers.  He followed in his father's footsteps and joined the regiment at the age of fourteen. Much later, as an adult, he served as a ship’s steward mostly on the Montoro, a vessel that regularly sailed between Australia, various South Pacific ports and New Guinea. He’d also owned a bar in Fiji at some time.

After his early encounter with fame, Dunne had slipped into anonymity and it took an erroneous report of his death in Melbourne in the newspapers in 1933 that forced him back into the limelight in order to set the record straight, that he was very much alive and was the real “Bugler Dunne of Colenso”. Apparently quite a number of individuals had tried to pass themselves off as the Bugle Boy in order to cash in on his fame, or gain medals, including one of them who was “a professional juggler and sword swallower”!

Brisbane resident, Mrs Grace Marguerite Gallwey (nee Phillips) who had served as a nurse during the Boer War, met the ship’s steward and verified that he was in fact one and the same as the 15 year old bugler whom she had treated nearly 35 years earlier in South Africa and in England. She remembered him clearly, that she helped him buy new feathers for his hat in Southampton and that she accompanied him when he met Queen Victoria at Osborne on the Isle of Wight, where the Queen gave Dunne a new bugle to replace the one he had lost during the battle.

Shortly before he died, Dunne talked to a reporter for the Sydney Daily Telegraph, telling his story (reproduced here from the newspaper image below)

'John Francis Dunne, boy-bugler hero of the Boer War battle of Colenso, was this week admitted to a Sydney hospital. He is now 65 years old.  [He turned 66 just days after the article was published.]   For years school history books have told of the bravery in battle of the 15-years-old bugler, and how Queen Victoria rewarded him with a silver bugle.  Boer War veterans often speak of his gallantry.  Yesterday, lying in his hospital bed, silver-haired and bespectacled, Mr. Dunne recalled the campaign.  “Colenso was a bitter, bloody battle,” Mr. Dunne said.  “It was December 15, 1899. We were fighting to cross the Tugela River and relieve Ladysmith, and the Boers were giving us a slathering.  I was just 15 at the time - I had enlisted as a boy bugler in the 1st Dublin Fusiliers a little over a year before, the day I turned 14.   I got the order to sound the advance - never play the retreat in the British Army, you know. Learn it, but never play it.  As I played the advance I began to charge with the officers at the head of the men, when a Boer bullet went through my right arm and hurled my bugle from me  Simultaneously a piece of shell struck my chest.  I staggered to my feet, picked up my bugle with my left arm, and finished sounding the advance.  The other buglers along the lines picked it up and sounded the call also and the troops moved forward.  We crossed the river with heavy casualties, but took Ladysmith.”  Mr. Dunne said he was carried from the battlefront on a stretcher, and was invalided to a hospital in England.  “Queen Victoria sent for me when I recovered,” he said. “I was taken to the Isle of Wight in the Royal Yacht to see her.  She was very kind to me, and presented me with the bugle.”  Mr. Dunne said the bugle was stolen from him while he was in the Army in England three years later.'

Dunne was discharged as medically unfit on 17 March, 1902. For his service in South Africa he received the Queen's South Africa Medal with the clasp Relief of Ladysmith and a £5 war gratuity. Apparently he had been offered the enormous sum of £3,000 by Madame Tussaud's for the bugle, but he declined the offer, only to have it stolen.

Details of his time after that are sketchy. His military records contain a letter saying that he transferred to Australia on 23 April 1907, his only address care of the G.P.O. Sydney, but in what capacity is unknown.

The photo below with his wife and children taken c. 1915 shows him wearing what looks like a ship's steward uniform. There is also a passenger list showing Dunne, aged 30, sailing from England to Australia on the SS Borda early in 1914, with wife Hilda E., aged 21, daughter Nora Ivi aged 2 and son John Francis aged 3 months. Dunne gives his occupation as a Clerk. The same family appears, but is crossed out, on an earlier ship passenger list. Perhaps they missed the sailing for some reason. Interestingly, this list further qualifies Dunne's occupation as a Shipping Clerk. From genealogical searches, his wife was born Hilda Kruckow in New South Wales and she had Italian heritage, but it seems that they were later divorced, which may explain why she does not appear in the funeral notices.

In a Fiji Islands Directory dated 1921, Dunne's name is listed as a resident of Levuka.

In 1922, Dunne was mugged in Sydney and again lost a number of valuable items, as per this report in the NSW Police Gazette. 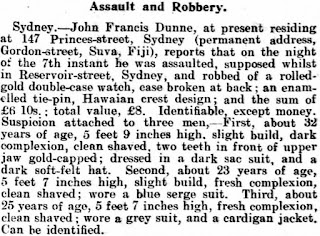 It would be fascinating to find out what happened to that stolen bugle. Perhaps it is in some private collection, but if it ever resurfaces, with its plaque intact, it should be instantly recognisable from its description in this extract from the Illustrated London News, 24 February 1900:

'Bugler Dunne had his visit to Osborne on Monday, crossing the Solent from Southsea in the charge of Lieutenant Knox. A boy of fifteen, dressed in khaki, he was ushered by Sir John McNeil into a small room, where sat her Majesty near a table. He stood and bowed a little nervously; then the Queen told him to step forward, asked him about his wound and whether he liked the Army - which he said he did - and finally presented him with a bugle to take the place of that which he lost by the Tugela River. The new instrument is silver-mounted; it has a green bugle-cord, the green dear to a boy whose father was born in County Tipperary; and a silver plate attached to it bears the inscription:

"Presented to Bugler John Francis Dunne, 1st Battalion Royal Dublin Fusiliers, by Queen Victoria, to replace the bugle lost by him on the field of battle at Colenso, on the 10th December, 1899 when he was wounded".'


This website carries a number of images of Dunne, including some recollections of a descendant and bisque figurines of the Bugle Boy, but some of the facts are at odds with elsewhere, e.g. it says he met the Queen at Windsor not the Isle of Wight, etc.


Bugler Dunne, Bugler Dunne, you are missing all the fun,
And another chap is bugling where the battle's being won.
Don't you hear the ringing cheers of the Dublin Fusiliers,
Bugler Dunne?

Yet you sing, yet you sing, though your arm is in a sling,
And your little bone is broken where the bullet left a sting,
And you show a bloody scar. Guess you dunno' where you are,
Bugler Dunne.

Yes I do, yes I do, for I've got a bugle new,
And it's shining all with silver, and its sound is good and true.
Left the old one in the river, and I'll go back there, no never -
Least not for you.

But I'll go back for the Queen, the finest lady that I've seen -
Yes, I've seen her, she's a nailer - and I say just what I mean.
She's a heart that's warm and true for the lads in red and blue.
God save the Queen!

(origins of this jingoistic ditty unknown)

Posted by Regina of Arbeia at 8:50 AM