When I first came to Australia in the early 1970s, it may seem surprising that I’d never heard of Ned Kelly. Only after I’d been enlightened by native-born Australians, visited displays devoted to him in museums, read a few books, watched some movies and TV shows and ultimately visited places like Euroa, Beechworth and Glenrowan in what is known as “Kelly Country” in North-East Victoria and Southern New South Wales, did I come to know more about this most famous of bushrangers.

All of what I learned led me to accept the history that Ned was a Robin Hood sort of figure, that he was, like that other Wild Colonial Boy of the song, a bit of a romantic rogue who “robbed the rich and helped the poor” and his “proud young heart” defended the downtrodden and marginalised. He wrote letters and advocated a form of colonial Irish independence from English imperialism. Plus, above all, he fought valiantly against a corrupt and evil police force, that the infamous shoot-out at Stringybark Creek was forced on him, that he killed only because he had to. Even his actions in shooting a dying policeman was seen as some form of mercy killing.

Then came a day when my family members were away skiing at Mount Buller and I chose to stay in the town of Mansfield where I wandered idly about, coming across this memorial to the policemen killed by the Kelly Gang at Stringybark Creek.

I pondered on the fact that the three named policemen killed by Kelly were all Irish-born, not English. It dawned on me right then there might be a lot more to be revealed about the legend than was generally known. 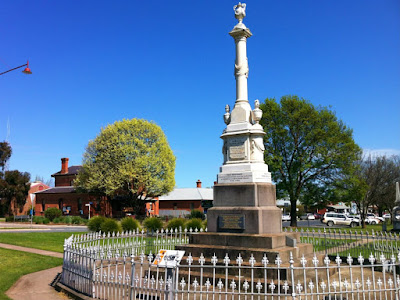 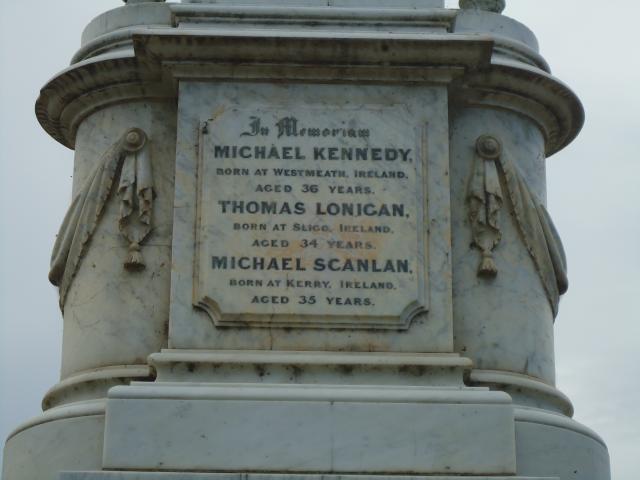 This led me to search for alternative points of view on Ned Kelly and find out whether I had been duped for some reason. There wasn’t much to be found. This was in the days before historic documents or newspapers became widely available on the Internet, but I was fortunate to hear some stories from those whose ancestors had been victims and had suffered cruelly at Kelly’s hands: horses and property stolen, women threatened, children terrified, homes trashed and even burned to the ground.

I learned that Kelly didn’t rob the rich English and give to the poor Irish; he robbed the poor Irish and then laughed at them, that he was no Robin Hood, but a self-serving narcissist, a violent and unstable criminal. Due to the pro-Ned lobby and massive myth machine, most of these people tended to keep their knowledge and opinions on Kelly to themselves.

Recently, I read and reviewed Mrs Kelly, a somewhat overwrought tome by Grantlee Kieza  about Ned’s mother. While I did have some sympathy for the woman, throughout that book her son came across as a very nasty piece of work and I sensed there might be a change in how people would evaluate the real Ned Kelly.

I am now pleased to have read Black Snake: The Real Story of Ned Kelly by Leo Kennedy, the great-grandson of Sergeant Michael Kennedy who, together with his two companions, was outgunned and subjected to horrific and sadistic treatment by Kelly at Stringybark Creek, yet has come to be belittled and denigrated by a veritably army of Kelly supporters, fanatics and fantasists for nigh on 140 years.

The facts in the book come from a wide variety of sources: official documents and family histories, from police and eye-witness reports of the time, nearly all of them greatly at odds with the myth. Kennedy explains how the legend started and, once it did, how it has been almost impossible to stop, even up to the present day.

When he was a young boy, Ned Kelly was never mentioned in the family and when Leo Kennedy came home from school one day asking questions about the famous bushranger, his father had to relent and explain the history, how Leo’s great-grandfather was murdered by Ned and how his great-grandmother Bridget had to suffer and bring up five children alone, to endure the lies that followed, how the lies became the truth. He writes:

“…  As writers, historians, and film and TV directors have taken on the story of Ned Kelly, sanitising and glorifying thievery and murder, Ned Kelly has morphed from anti-hero to hero and back again. His crimes are excused or removed from the story. Worse, some hold him up as a role model, an icon. A loveable larrikin or Robin Hood figure. Some even deny the murders at Stringybark Creek …”

He further writes about the families who were hurt - Kelly descendants as well as those of the policemen - as the myth warped and grew tentacles, seemingly with no place for any dissenting view. Leo Kennedy states that the level of “distortion is breathtaking” and continues to expand in websites and blogs, Wikipedia, even “the Australian Government’s own website is loaded with errors”.

Even in Ireland, the misinformation persists, with some Irish academics going so far as adopting Ned as some kind of hero for his anti-English attitudes.

“The truth is the Kelly Gang were not the ‘Irish’ and ‘Catholic’ figures invented by writers years later; they were not in a battle against the English overlords. Most Irish wanted to assimilate and settle in to their new home and get on with their lives. Irish Catholic sentiment at the time chimed with the general populace: good riddance to the Kelly Gang.”

There will be some individuals who are none too happy with the publication of this book. Many depend on the mystique of Kelly for their survival, especially tourism operators and souvenir sellers, but also diverse industries such as clothiers, wineries and even letter-box and garden furniture manufacturers. One famous artist in particular established his career with his images of Ned Kelly, being Sidney Nolan. There is nothing to be gained in exposing the truth if it means you have a lot to lose. Nobody wants a money-making legend messed with.

From where I now sit, I can look across the road to where one of my neighbours has a fairly large statue of Ned Kelly in full armour with rifle in pride of place on his front step. I doubt this neighbour is ever likely to read this book as he’s most likely a “true believer” but it is galling to know there many similar crass statues in thousands of gardens across the country, that few people give any deep or serious thought to what they represent. 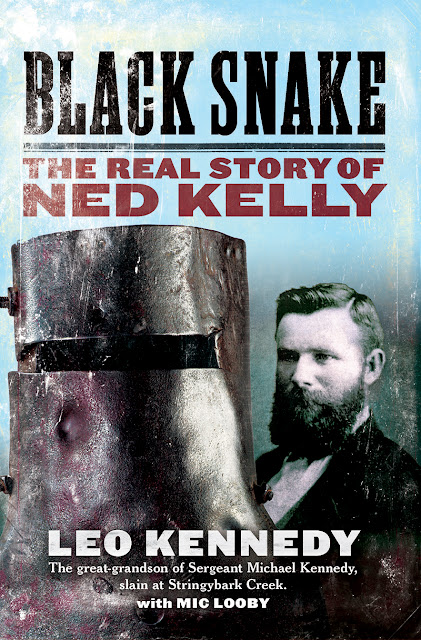 The book is a long-needed tribute to those honest and hard-working policemen whose names are on the Mansfield Police Memorial and who faced up to the Kelly Gang with little training and support, under-resourced (they even had to buy their own guns) but were determined to do their duty and help their community, and bring the criminals to justice. For their sacrifice and the ongoing wrongful indignities their families were subjected to, they deserve to be admired by every Australian, instead of dismissed and ignored.

In an era when history is constantly subject to revisionism, it is now time to set the story straight on Ned Kelly.

(The content fully deserves five stars, although the narrative does have some editing issues and grammatical errors, but it is hoped these will be corrected in future editions.)

Posted by Regina of Arbeia at 5:13 PM