"One of the darkest secrets of all time"

Anyone who is familiar with Gilbert & Sullivan comic operettas or the works of Charles Dickens will have enjoyed the humorous and imaginative names those creative genuises often gave their characters, so when I came across a real historical tale featuring secret identities, a disappearing act, Napoleonic skulduggery and a cast of individuals with rather bizarre names like Tryphena Thistlethwayte, Galway Mills, Captain Kitzing, Philadelphia Batty, Caroline de Cresigpny and Emmeline Pistocchi among many others, I almost thought it was a major leg-pull.  ﻿Plus added to the mix is the eccentric author Sabine Baring-Gould who wrote weirdly divergent works such as The Book of Werewolves and the hymn Onward Christian Soldiers (in company with Sullivan of all people!)
﻿But no, the story of the vanishing of Sir Benjamin Bathurst in 1809 is deathly serious, although the facts have been twisted and altered over the last two centuries to suit numerous believers in the wacky or the "unexplained", time-travel, abduction by aliens and the like. The Wikipedia entry on Benjamin Bathurst gives the basic facts but when one appreciates the volatile historical era and that this was simply a case involving espionage and politics, then a more plausible reason for Bathurst's disappearance and murder can be deduced.
For anyone interested in finding out more there are various reports of the disappearance posted online, in journals and books, including this one that appeared in the Fortean Times in 1990.

Mary Crawford Fraser's 1915 book Storied Italy also relates the drowning of Benjamin's teenaged daughter, Rosa, in the Tiber at Rome some years later. (If it wasn't such a tragedy, the effusive sentimental screed on her tombstone - not far from that of John Keats - could also border on the Gilbertian. It can be read in full here.)
Crawford also retells the tale of the disappearance of Rosa's father as heard from his sister Signora Pistocchi and which she calls "one of the darkest secrets of all time". She also describes the subsequent dastardly murders of the French secret agent Comte D'Antriagues and his actress wife by an Italian servant who committed suicide after doing them in, which is yet another twist in this strange story and could well have been a forerunner plot for numerous future spy novels. The lurid turn of phrase in reporting the "shocking spectacle" of these gory murders using a "most superb Turkish poignard" and at least four pistols is also typical of the journalism of the time. This extract from Jackson's Oxford Journal, July 25, 1812: 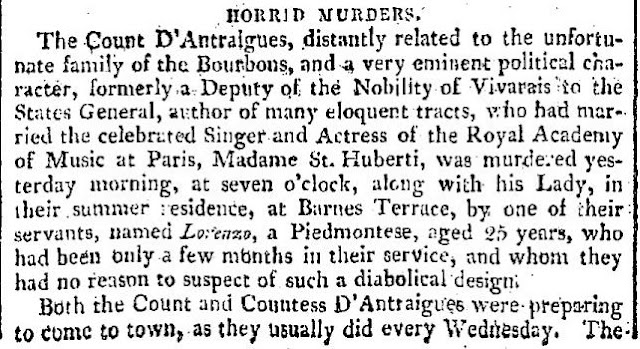 Posted by Regina of Arbeia at 7:28 PM