A Waratah by any other name...

With the centenary of the sinking of the Titantic fast approaching and the events on the Costa Concordia still fresh in the mind, I wondered why certain maritime disasters are soon forgotten and others linger on.
Another ship also described as “unsinkable” had its loss centenary in 2009 but didn’t warrant quite the same amount of hysteria (admittedly the ship wasn't as glamorous nor the body count as high as for Titanic) and that was the disappearance of the SS Waratah in 1909. Not even the involvement of famous author Clive Cussler in the search for the vessel has solved the mystery. Other writers and  bloggers, including this excellent detailed website by a South African genealogist tell the story of the ship and its strange disappearance off Durban. 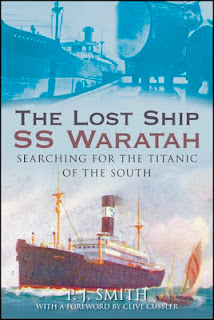 A book has also been written by P. J. Smith.

The waratah is the flower emblem of the State of New South Wales and quite a number of vessels have been called Waratah over the years, but it looks as if it was a jinxed name, as can be seen by this list of official listed shipwrecks from the Australian Government environmental website.

But this doesn't show all of them. Disasters involving ships bearing this name go back to at least 1848 when Australian newspapers reported a “Dreadful Shipwreck”, being the loss of the Waratah, bound for Sydney from England, with the loss of thirteen lives, including the commander. It appears the ship got into trouble in a storm near Ushant, off the coast of Brittany, on 19 February with a total loss of all masts. Some of the passengers and crew were rescued by a passing Norwegian vessel, with other crew members left on board. Early in March, the ship "was got ashore at Molene, near Brest with eight men saved, but the cargo much damaged".

Thus, it was somewhat unnerving to read this Melbourne newspaper extract during the investigation following the 1909 disappearance of SS Waratah. Note the rather eerie connection to things going wrong also at Ushant:

W. Sharpe, able seaman, said that in April, 1909, he asked the chief officer of the Waratah for employment, but his answer was, "If anything better offers take it because the ship will be a coffin for some body." He shipped on the Waratah for a voyage to Australia. Off Ushant he noticed that the vessel would roll to leeward, stop, continue the roll, and recover. That was unusual in any ship. ….

One of the very earliest paddle-wheelers in Australia was called Waratah, built 1851 for Hunter Steam Navigation and sold in Shanghai 1862, its ultimate fate unknown.

A final happy and positive story is that of the tug Waratah rescued from the scrapheap of history and which is now a proud part of the Sydney Heritage Fleet. Long may she voyage safely on Sydney Harbour!

And ship names aside, there is also a Waratah Bay in Gippsland, Victoria. The Encylopaedia of Australian Shipwrecks lists 15 separate incidents involving foundering, collisions, stranding or sinking taking place in  Waratah Bay with the earliest believed to be an unknown French barque wrecked early in the 19th Century. But that's quite another story.

Posted by Regina of Arbeia at 5:04 PM