When researching history in old digitised newspapers, one comes across a plethora of weird and wonderful classifieds that vary from the slightly amusing to the outright hilarious, or even incredulous. If it wasn’t so time-consuming, I’d seriously think about a new blog featuring a collection of these old ads but I’m sure there are many other folk out there already doing similar. Instead, I’ll occasionally just select one at random and see if there is something historically obscure worth investigating in it.

The words in bold type, BY HER MAJESTY’S COMMAND and BRITISH BLONDES caught my eye in one from The Morning Post, of 17 February 1832. My mind racing with inappropriate explanations, I soon realised it was perfectly innocent and a careful reading revealed the Blondes to be a type of lace sold by London lace-maker, Henry Dison.

To learn more, I was off on quite an adventure.

I dipped into the pros and cons of bobbins, and machine-made lace vs. the hand-made variety. I visited (virtually) Honiton, Devon, and the Lace Market in Nottingham.

I found that British industry was in a precarious state in the 1830s and that the royal ladies of the day – Queen Adelaide, the Duchess of Kent and her daughter Princess Victoria (later Queen) - were all great supporters of British manufacture and showed the government up by insisting on the women at court wear British-made clothes.

I even ended up perusing law notices dissolving business partnerships to a trial at Old Bailey resulting in the transportation of an unfortunate Thomas Norrington to Van Diemen’s Land (Tasmania) for robbery.

And this is what started it all: 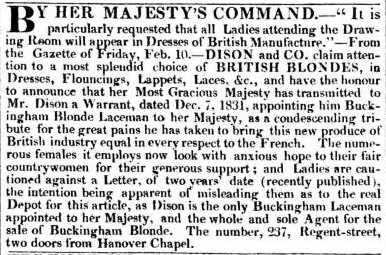 The advertisement is one of many similar placed in British newspapers in the early to mid 19th Century by lace merchant Henry Dison, either on his own or in partnership with others.

The relevant London Gazette notice referred to was as follows:

Office of the Vice-Chamberlain to the Queen, Queen’s House, St. James. February 9, 1832.  NOTICE is hereby given, that the Queen's Drawing-Room, on Friday the 24th instant, being for the celebration of Her Majesty's Birthday, no presentations will take place.It is particularly requested, that all Ladies attending the Drawing-Room will appear in dresses of British manufacture.

I wonder how they decided the Ladies were wearing British manufacture when they arrived at the Drawing Room. Did they have to provide labels as evidence? Was a particular lady-in-waiting seconded to check with a magnifier for evidence of Continental as opposed to British lace? What happened to any unfortunate woman who failed to heed the royal decree?

There are a number of engravings and prints available showing Dison’s shop in Regent Street, the originals done by Thomas Hosmer Shepherd.  In these from a collection at www.motco.com, if the images are enlarged, the name Dison can clearly be seen over the shop to the right on the corner of Princes Street, bearing the royal warrant and with a couple of loiterers and what looks suspiciously like a woman begging out on the steps. I couldn’t imagine her being tolerated for long by such an up-market establishment! 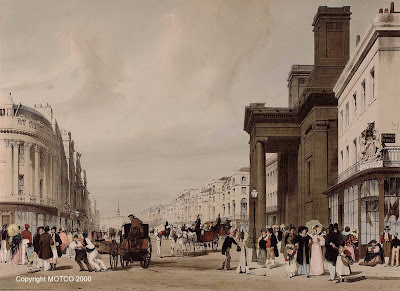 Another view, with the shop shown in the middle in front of the dome. 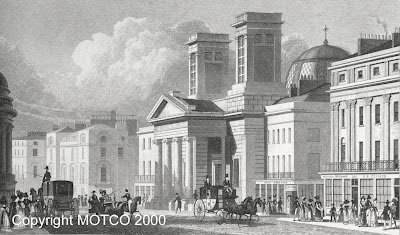 What happened to Dison’s - or Henry Dison - eventually? I have yet to find out although the shops of Regent Street have changed countless times since his day. At least it’s all still about fashion, with a Karen Millen store now on the same corner where that woman once sat.

A bit of British Blonde and fashions of the Court ladies who probably frequented Dison's. 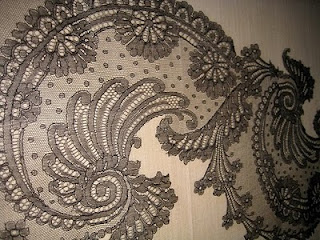 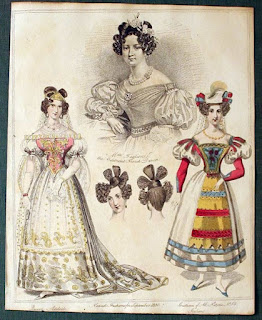 Links related to this blog:

Norrington's death sentence was commuted and he was transported to Van Diemen’s Land:
http://www.convictrecords.com.au/convicts/norrington/thomas/105134

For the really serious student of lace, check out this booklet produced by Dress & Textiles Specialists in association with the Victoria & Albert Museum
http://www.dressandtextilespecialists.org.uk/Lace%20Booklet.pdf

Posted by Regina of Arbeia at 5:46 PM