The Bishop's Sister - The Zambezi Expedition (4)

Conditions were horrendous enough even for the toughest and hardiest of men, and the last thing David Livingstone would have wanted on the Zambezi Expedition was a group of white women. But when one of them happened to be his wife, the long-suffering Mary, who was tired of years of enforced separation from her husband, he had to give way.

He also had pressures being exerted on him by the leaders of the Universities Mission to Central Africa (UMCA) to bring out their womenfolk, being Bishop Charles Mackenzie's sister, Miss Anne Mackenzie, and the wife of Reverend Henry de Wint Burrup - nee Eizabeth Mary Tudway - who will be the subject of another post.

At least with her background, Mary Livingstone was probably the only woman in the group who knew exactly what she was getting herself into, unlike the others.

From the various accounts relating to her, the character of Anne Mackenzie suffers from two extremes. She comes across as either a gossipy, complaining and ageing hypochondriac - with a touch of the racist thrown in - or a good-humoured, sturdy and sensible Scotswoman, prepared to put up with anything. So which was she? Or did she start out as one and turn into the other as a result of her experiences and extreme privations up the Zambezi? 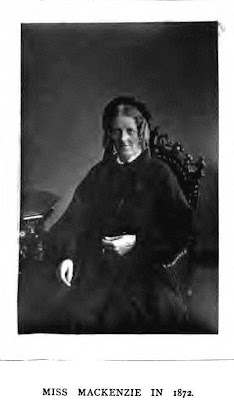 A short biography entitled An Elder Sister written in 1877 is available at Internet Archive, but Anne is a second-fiddle subject and most of this book is really about her baby brother, Charles, who was to become the Bishop.

In modern eyes, Anne's obsessive devotion to Charles might seem to border on the unhealthy, but she was a typical ultra-religious, dutiful and high-minded Victorian who had accepted that her main purpose in life was to dote on, guide, and generally look after this youngest brother who had many noble and admirable qualities but was unworldly and impractical as well and whom she thought was easy prey for exploitation by sharp or unscrupulous individuals. She was probably right to some extent, given the general folly and blunders that attach to the UMCA's first attempts to found a mission.

Anne and another sister, Alice, had travelled to South Africa to help Charles with teaching girls at the church school and keeping house when he was the Rector of Durban and later Archdeacon. What now seems rather strange terminology, Charles called Alice his "black sister", on account of her enjoying her work with Africans while Anne was called the "white sister", as she preferred European colonials, although she eventually overcame her difficulties relating to black people and in fact spent the latter years of her life supporting schools in Zululand and in raising funds for them.

Alice never made it to the Zambezi Expedition as she decided to get married in Natal. Anne was said to be terrified of all the deadly creatures, savages and discomforts she would encounter, but went along out of duty and worry over her brother. But she made sure she packed lots of home comforts, including arm chairs and a donkey called Katie who would be used to carry her over the rough ground when necessary.

Like the other women on the journey, Anne was to suffer terribly from the prevalent fevers and skin diseases and was lucky to survive, especially given her age and semi-invalid status. One can't imagine how she felt early in March, 1862, when so desperately ill herself she discovered that her precious brother had succumbed several weeks earlier and that they had unknowingly passed by his grave as they sailed up the river intent on the great reunion. But despite this shattering blow, Anne proved her fortitude and recovered; enough, according to some reports, to still find time to gossip about Mary Livingstone's behaviour with the Reverend James Stewart.

Meanwhile, David Livingstone made the comment that Anne "... bears up very well: people who have a competence hold out wonderfully ..." only to be followed by remarks about Bishop Charles' "lack of control" and that:

"... this sad loss will have one good effect: better men will be sent out and no-one hereafter come for a lark or to make a good thing of playing the missionary for a few years and then reaping laurels."

Livingstone was never one to mince words or avoid calling a spade a shovel if need be, so one wonders what Anne thought of this opinion of her adored brother Charles being on a "lark"? Maybe privately she had to agree.

When Anne finally returned to England, she became a writer and editor of a religious newspaper called The Net Cast in Many Waters and she devoted all her energies in supporting the missions in Africa. She died aged 64 in 1877 and had lived most of the fifteen years after her brother's death at Woodfield House, Havant, which still stands today but has now been subdivided into flats

Posted by Regina of Arbeia at 3:52 PM