The "Blythe Spirit" - The Zambezi Expedition (5)

Much of what is known about the ladies of the Expedition comes from a book by W. Cope Devereaux, who had been Assistant Paymaster on HMS Gorgon, the Royal Navy vessel that was cruising the coast of East Africa as part of the suppression of the slave trade and was given orders to assist Livingstone. Unlike more formal, often censored, accounts and biographies, Devereaux has a wry, if somewhat condescending masculine superiority, and while not all that he writes is completely trustworthy or accurate, the book gives the detached outsider's view of several individuals of the Expedition.

Published in 1869, a copy of Devereaux's book found its way into a library in Durban, South Africa (the Campbell Collection), and there at some time in the next year or so was annotated by a woman with the initials of E.M.B. - possibly late in December, 1870, when she was en route to a completely new life in Australia. (For the full article see The Society of Malawi Journal, January 1977)

She seems to have been known as "Emily", possibly because of her E.M. initials, although she was born Elizabeth Mary Tudway in Gloucestershire in 1840 and married Reverend Henry de Wint Burrup in 1861 shortly before he embarked on his travels with Bishop Mackenzie.

Her annotated comments next to Devereaux's passages about the ladies indicate something of her character. She is not at all impressed at his suggestions they were "helpless" or "fond of dress". Examples include:

The author speaks of what he does not understand. It is easy to criticize others' actions when one is not in the field! Things were done with much prayer and consideration and not "foolishly" and "conceitedly".

All is an invention of Mr. D[evereaux]. The "poor creatures" were by no means as unfortunate as he represents.

Although E.M. was devoted to the idea of being a missionary alongside her husband, she also seems to have had great energy and sense of fun, and adds comments about the food, including eating sweets, about her hair being long enough to sit upon, and the horrific mosquitoes that plagued them incessantly.

E.M.'s world was soon changed forever when she learned she was a widow at the age of 22 and, suffering greatly from boils and ulcers, she was cared for by Mary Livingstone until she and Miss Mackenzie could be repatriated to their safer lives.

Curious as to what happened to E.M. after her sad experience in Africa, I was surprised to discover that she had strong links to Australia. She was married again in 1870, to ironmonger merchant, James Levick, who had homes both in England and in Sydney. James was a widower, nearly 25 years older than E.M. and with several grown children.

The Victorian Public Record Office passenger lists show that E.M. arrived in Australia with her new husband and some of his children on the ship Queen of the Thames (see note below) in January 1871. Tragically, her first child, Lawrence Burrup Levick, died in August of that year, but she went on to have several more children in Sydney before James Levick died in 1879 and she returned to England a few years later.

My investigations led me to contact one of her great-granddaughters in Australia. She told me that there is still in existence an old trunk full of family memorabilia that belonged to one of E.M.'s sons, Lionel Levick, who died at sea on his way home to Australia in 1913, leaving his three daughters orphaned. The trunk spent much of the past century in an old country barn but apparently it contains letters, journals and even photographs of individuals unknown to the present generation of Levicks. Some of them include black people.

E.M.'s great-granddaughter had only limited knowledge of the Zambezi Expedition, although the names "Burrup" and "Tudway" were familiar to her. It seems several of E.M.'s female descendants were strong women who overcame hardships and challenges and were known for their "fervour" in whatever paths they chose in life. They have included an artist, a sufragette and a university professor.

Perhaps some day, someone in the family will investigate that trunk in greater depth and more historical records or facts could come to light - maybe even photographs of E.M. or others involved in the Expedition. It is possible that new information could be added to the historical records and it would be wonderful if this does happen as there is still so much that is unknown about the experiences of the women in particular during this early thwarted attempt to bring Christianity and civilization to Central Africa.

E.M. died in 1907 and here is her obituary from The Cheltenham Chronicle, also an earlier article in which her son tells the story of her hair and how an African chief offered to buy her with oxen (this episode is also covered in Devereaux's book). 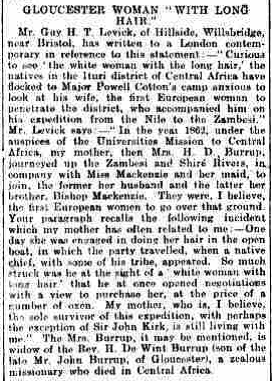 Note:  In another of those odd quirks of history, the vessel that took E.M. to Australia, The Queen of the Thames, was wrecked at South Africa on her return voyage in 1871. On board was geologist, Richard Daintree, after whom the Daintree Forest of North Queensland is named. Most of his collection of rare geological and other specimens was lost in the wreck, but he managed to save his valuable photographic plates. Read about them here.