One of the last "Nightingales" - The Zambezi Expedition (6)

Anyone who was born in 1831 and died in 1933 at the ripe old age of 102, would have been witness to some of the most remarkable developments in human history. They would have seen the worldwide expansion of the railways, motor cars and commercial air flight. And then there were the amazing inventions of electric lighting, telephones, radio and motion pictures, as well as the great medical advancements, including the discovery by Dr Ronald Ross that the malaria which had so blighted the Zambezi Expedition was caused by mosquitoes. Jessie Lennox was one such person, and her story rounds out those of the women of the Expedition.

Initially, most of what I was able to find out about Jessie followed on from newspaper obituaries and this one from the British Nursing Journal of February 1933. As will be seen, her experiences on the Zambezi are not really detailed and it is mostly about her later career in nursing and her friendship with Florence Nightingale.

Miss Jessie Lennox, who was a personal friend of Dr. Livingstone and Florence Nightingale, has died in Edinburgh at the age of 102.

She first went to Africa as a missionary in 1858, and after a period in England, she went out again in 1862. She then accompanied Mrs. Livingstone from Durban to the mouth of the Zambesi, and witnessed the meeting between the great missionary and his wife there.

Returning again to England, Miss Lennox was associated with the Nightingale Training School for Nurses in London and became a close friend of Florence Nightingale. She was one of the first six Army Sisters appointed by the War Office to the Royal Victoria Hospital at Netley. These Sisters were received by Miss Nightingale, that she might give them parting instructions. She lay in bed, pencil and paper always beside her, that everything of interest might be noted down. Miss Lennox described her bedroom as a large, airy room - “with plenty of ventilation, even in those days!” In giving the Sisters advice, Miss Nightingale exhorted them that they were never to say they were unable to do anything!

For 18 years she was matron of the Sick Children’s Hospital in Belfast, and after her retirement she was honorary matron for ten years of the epileptic colony at Bridge of Weir, Scotland.

When the Scottish War Memorial was opened in Edinburgh in 1927, Miss Lennox was an honoured guest wearing a nursing uniform similar to the first issued to the British Army, and she was presented to the King and Queen and the Prince of Wales.

Miss Lennox has related the circumstances which brought about her first visit to Miss Nightingale’s house. From all over the world she was receiving applications for advice and assistance in nursing matters. On that occasion the German Empress - mother of the ex-Kaiser - had requested that a complete set of probationer’s uniform be sent to Germany as a model, and Miss Lennox was the nurse deputed to convey it to Miss Nightingale’s house in Park Lane.

After years of devoted service the pioneer “Nightingales” are passing to their rest.

While searching for images online of Jessie Lennox, I was very pleased to come across the Hole Ousia blog which carries a post about a family connection to her and adds much more information from private sources. It states that Anne Mackenzie, to whom she was maid-companion in Durban, had this to say about her:

Alice [sister of Anne Mackenzie] has brought us a treasure in Jessie, who is the brightest creature I have seen for many a day ...


Jessie is a perfect delight, so ready to make herself useful, and she has volunteered how very happy she is already.

Anne Mackenzie encouraged Jessie into nursing after their African experiences and she had a long career. References to her progress and also extracts from her letters appear in the Collected works of Florence Nightingale but they also indicate there were periods when she was sick. She had to resign from Netley in 1870 due to ill health and again from the Belfast Children’s Hospital in 1891 for the same reason. Although she lived to a great age, even by today’s standards, one wonders if the deprivations and malarial fevers that she and the other women suffered all those years earlier on the Zambezi may have been a contributing factor to those episodes of ill health.

One newspaper reported that Jessie was buried in the North Merchiston Cemetery, now in a sad state of disrepair, but I have been unable to discover whether she has a traceable tombstone. [Addendum - thanks to recent comment, discovered this is incorrect and she is buried at Morningside Cemetery in Edinburgh.] 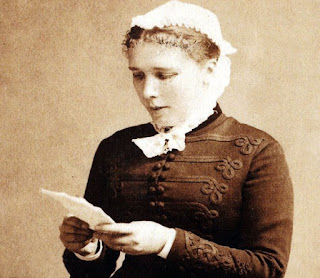 There is one other white woman who journeyed up the river with Jessie, Anne Mackenzie, Emily Burrup and Mary Livingstone, who remains a mystery. All the published sources and references on the Expedition only ever refer to her as "Sarah". Unlike her companions she does not seem to have left her mark in any way and, like mist over the Zambezi, has simply evaporated into history.

Posted by Regina of Arbeia at 3:53 PM